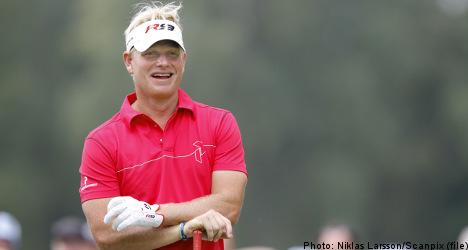 Hedblom on the first day of play at the Scandinavian Masters, July

He leads in Valencia by one shot from joint overnight pacesetter Paul Lawrie, who shot a 70 to add to his opening 64, Spain’s Gonzalo Fernández-Castaño and Italian Matteo Manassero.

Next come a group of four tied on seven under: Spain’s Álvaro Velasco, who jumped 48 places with a 64 of his own to join Lawrie’s fellow overnight leader Ricardo González of Argentina, Sweden’s Christian Nilsson and France’s Grégory Bourdy.

Ryder Cup vice captain Sergio García, who won at the inaugural tournament in 2008, added a 73 to his first day 71 to sit two over, missing the cut.

Hedblom shot to the top of the pack with six birdies, an eagle and a single bogey at Club de Campo del Mediterráneo. However, at the ninth – his last – the three-time European Tour winner found trouble off the tee and ran up a bogey five.

“I think the longest par putt I had today was a tap-in. Everything was going close and then one bad tee shot on the last. Still, in the lead with two days to go,” the 40-year-old told europeantour.com.

He conceded it has been a frustrating season – he is currently 98th on The Race to Dubai, which would represent his lowest position since 2002. However, he is optimistic that a good finish in Valencia can reignite his chances of reaching next month’s Dubai World Championship.

“The game hasn’t been as solid as it usually is. Putting, my lines haven’t been as good as they usually are but a good finish here and it can be a good year. Two more rounds like that and I’ll be smiling a lot,” he said.