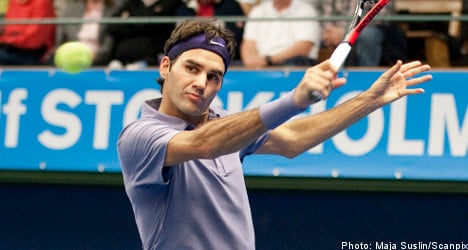 Federer, ranked second in the world, has put himself into position for a 64th career title after defeating longtime rival and close friend Ivan Ljubicic 7-6 (7-5), 6-2 in their semi-final.

Federer last lost to a German player when Nicolas Kiefer beat him in Halle in June 2002. Federer will be trying to lift a trophy in an 18th different country as he plays in Scandinavia for the first time in a decade.

“I’d love to win. I’ve never won a title in Sweden, that would be something special. But it’s good to win one in any case. It’s a good feeling to walk off court as a winner,” he said.

Federer, who has won only two of his six finals in 2010, would love to start lifting that average as he enters the final stretch of the current campaign.

“It would be nice a to win a third title, another would be great. I’ve had an amazing run in the past winning 24 straight finals. Maybe this can be the start of another streak,” he said.

Mayer will be looking for a huge upset when he faces Federer, who leads 2-0 in their matches against one another.

“The confidence is obviously in my favour. “But he has nothing to lose. He will come out aggressive. I’ve played him a few times and managed to beat him,” said Federer.

Federer improved his record against Ljubicic to 13-3 and has won their last 10 meetings.

“It’s been good all week. I started with a first win in under an hour and they just got tougher since that. I’ve only had three matches so far and there’s not been a lot of tennis played. Ivan made it tough at the start, he executed well like Stan [Wawrinka] did yesterday,” he said.

“I didn’t start so well, fell behind and had to start scrambling. I also had a bit of luck come my way, which you also need. Today could have been really dangerous. Ivan can hit any corner with that serve and if he’d won the first set he would have been in control that would have made it really hard for me. But I found a way, hung in there to win,” he added.

Ljubicic admitted there was little he could do once Federer got up a head of steam.

“I played OK, but trying to come back in the second set was tough. He relaxed once he won the first set and just played better, it got a lot tougher for me,” he said.

Federer ended with his 10th ace on a second match point after 77 minutes as he won his 51st match of the season against a dozen losses.

Mayer admits he faces a huge deficit in the final.

“I have nothing to lose. I was a little tired today, physically and mentally. But I fought hard, I played for the line on match point and had a bit of luck. After losing the second set I was able to come back in the third,” he said.