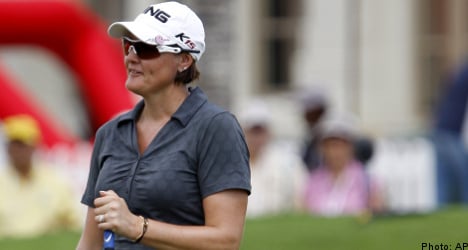 The players are tied on 136, six-under-par and a stroke ahead of the field moving into Sunday’s final round.

It was a mixed day for Hjorth, a three-time winner on the LPGA Tour, with four bogeys, five birdies and a crucial eagle on the sixth hole to end with a 68.

“I had a lot of birdies and a great eagle, so that obviously helped. Then I had three bogeys in a row, which was not very good, but overall I’m very happy with the round. I actually thought someone would shoot away a little bit in the scoring, but I’m happy that they didn’t,” she said.

“I’m hitting the ball well and obviously making some really good putts, so I’m looking forward to tomorrow. I really just have to stay focused on myself. I’m working really hard on trying to stay within myself and play against myself and no one else. So that’s really my goal,” she said.

Lee, who shot a 66 on Friday to share the first-round lead with Japan’s Mika Miyazato, finished with a one-under 70.

“I played well. Tomorrow hopefully it’ll work better,” said Lee, who turned professional in 2004 and has one LPGA Tour victory to her name.

Sitting in third place is rising star and compatriot Kim Song-Hee after rounds of 69 and 68. American Natalie Gulbis carded a 68 to be in a tie for fourth with Miyazato and LPGA Hall of Famer Juli Inkster.

Gulbis, who was bogey-free until the 18th, feels the course suits her game.

“I love this golf course. This is a golf course that suits my eye real well. I’m an aggressive putter, so these greens suit my game well and, depending on what the leaderboard looks like at the end of the day, it will be fun to go out there and play aggressive and see what happens,” she said.

Jean Chua was the best performer among the local players on two-under par, but it was day to forget for English veteran Laura Davies, who fired a 76 to be 13 behind the leaders.