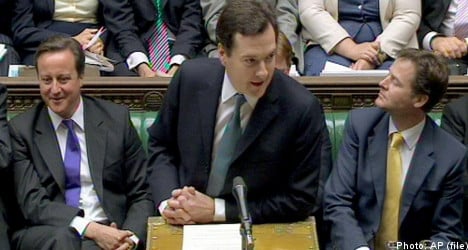 “The main thing is: don’t pretend it won’t hurt,” advised Jan Larsson, the current head of communications at Nordea bank, who in the mid-1990s was the top political advisor at the Swedish finance ministry.

The situation in Sweden two decades ago had clear parallels to Europe today.

Following years of crazed property speculation and deregulation of the Scandinavian country’s credit market, its banking and financial service bubble burst in the early 1990s amid a global economic slowdown, landing it in its deepest economic crisis since the 1930s.

Like Britain today, where Chancellor of the Exchequer George Osborne announced nearly half a million public sector job cuts among measures to help balance the country’s dismal public finances, Sweden’s budget deficit in 1994 had swelled to more than 10 percent of its gross domestic product (GDP).

Sweden, whose national debt peaked at around 80 percent of GDP, saw around 500,000 jobs disappear throughout the crisis.

“That was about 10 percent of the labour force. A lot of the jobs cut were

in industry, but a lot were also in the public sector,” said Börje Johansson, a national economics professor at Jönköping International Business School.

By 1997, though, the situation had turned around.

“Since then, Sweden has in general had the strongest productivity in all the OECD. There is definitely a Swedish success story to look back at,” Johansson told AFP.

However, before Sweden turned into a success, it was a disaster, Larsson said.

“I think in one of the worst months (in 1994), we had to borrow around 25 percent of state expenditures on the credit market,” he said.

However, in that case, it was the left-wing Social Democrats who overthrew a ruling centre-right coalition.

“We had a huge advantage due to the low approval ratings of the sitting government,” explained Larsson, who worked closely with incoming finance minister Göran Persson, who became prime minister two years later.

In light of its sky-high poll numbers ahead of the 1994 elections, the Social Democrats decided on an unusual strategy: they announced in advance they planned to deeply slash benefits and dramatically hike taxes.

“That cost us about six percent in the election, but we still won, and when we did we had a very solid mandate,” Larsson said, cautioning that in Britain’s case, the message before the British government’s announcement of spending cuts may not have been clear enough.

Lacking transparency “can be a big problem…If you’re putting 500,000 people out of work, you really need to prepare the ground for it or you see huge discontent,” he said.

When Sweden’s government in the 1990s began cutting public sector jobs, slashing pension and unemployment benefits, selling off publicly-owned companies and hiking union membership fees, it had one thing going for it that Cameron’s cabinet in London today does not: it was left-wing.

“I think it was possible for us to do these things exactly because no one suspected that we were opposed to the public sector or that we were out to punish the unemployed,” Larsson said.

While the reforms to Sweden’s welfare state were painful in the 1990s, Larsson says he is convinced they were what saved the system.

“We streamlined public authorities and made them efficient,” he said, adding, “I think that is important for making any Nordic model work: that there is efficiency, that it is not too expensive.”

However, according to Johansson, the reforms altered the character of the welfare state.

“It is telling that when we got a rightwing government here (in 2006) they wanted to maintain basically all the reforms,” he said.

As in Britain, there was much debate in Sweden at the height of the crisis about whether the cuts were fairly distributed.

“It was very important to us that the measures be seen as fair. We didn’t just cut in the public sector, but really tried to spread the pain,” Larsson said, pointing out that the government had introduced an extra tax on high income earners that remains in place today.

“It didn’t bring in a lot for the state, but it had a very high symbolic value,” he said.

Another positive aspect of the Swedish reforms, according to Larsson, was that they were done quickly.

“You have to rip the band-aid off all at once,” he said, pointing out that nearly all the cuts went into effect in 1996.

“It was a crappy year, but at least we got it over with,” Larsson said, adding that by 1998, the turnaround was a fact and helped hand the Social Democrats that year’s election.