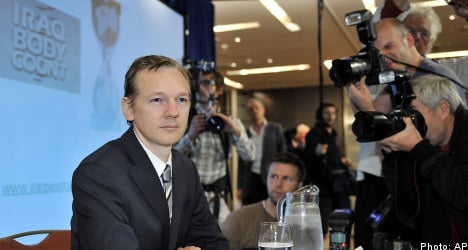 The use of Swedish weapons in war is a controversial topic. However, according to the newly released documents, the US used them against its enemies in Iraq and they are also in the hands of these enemies or are fired at Americans, SVT’s Rapport news bulletin reported late on Saturday.

WikiLeaks founder Julian Assange, who was denied a Swedish residence permit earlier this week, defended the unauthorised release of the documents, saying they revealed the “truth” about the conflict.

The documents from 2004 to 2009 have revealed about 15,000 more civilian deaths than previously reported.

According to SVT Rapport editor-in-chief Morgan Olofsson and Eva Landahl, editor-in-chief of SVT’s Aktuellt and Agenda, the three programmes had in the past few months, along with UK newspaper The Guardian, German magazine Der Spiegel and US newspaper The New York Times, gained access to extensive documentation on the war in Iraq from Wikileaks.

“In the documents that we have chosen to publish, we have removed the names to minimise the damage that publication could cause,” Olofsson and Landahl wrote in an article published on SVT.se late on Saturday.

They added that no one, including neither Sweden-hosted WikiLeaks nor the Pentagon, had any influence over the way they treated the material or what they chose to publish.

The weapons mentioned in the WikiLeaks reports include Carl Gustaf recoilless anti-tank rifles and various types of ammunition, but old Swedish sub-machine guns also pop up from time to time, Rapport said.

A single-use weapon in plastic is mentioned about 200 times in the documents. Perhaps not surprisingly, Sweden has exported well over half a million AT4s to the US, the report said.

One of several events that mentions the use of Swedish weapons in the classified documents involves insurgent Abu Yasin, classified by the US military as a so-called HVT (high-value target), along with 17 other people who were killed in 2007 with the help of a Swedish Excalibur grenade, the report said.

“The systematic abuses in Iraq are extremely outrageous. The responsibility rests heavily on the Iraqi government, but also on the US, which sent thousands of detained prisoners to the Iraqi security forces,” party foreign policy spokesman Hans Linde said in a statement.

“WikiLeaks shows that Iraq, as well as the US, have clearly violated the UN Convention Against Torture. Sweden should be a country that stands up for human rights, even when they are violated by the US and its allies. Sweden must powerfully condemn this assault,” he added.

Linde pointed out that WikiLeaks has previously shown how horrific abuse and torture were much more extensive than was known in Afghanistan. The new documents now show that the same situation applies in Iraq.

“We now clearly understand the importance of being able to evaluate uncensored information. We cannot omit American military censorship because the Swedish people should be allowed to form an opinion on the war. The world has a right to know what is going on and as such, we welcome WikiLeaks’ revelations,” said Linde.