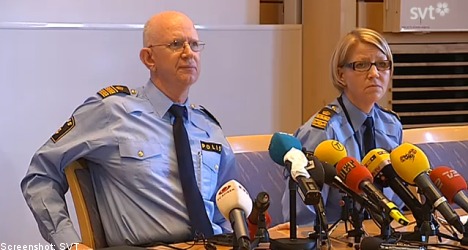 According to the local Sydsvenskan newspaper, the former leader of one of the town’s largest criminal networks is among a group of “old friends who have stuck together” and who are now actively looking for the gunman which has left Malmö’s immigrant community gripped with fear.

“He had better hope that we don’t find him first,” a man who referred to himself as “Leo” told the newspaper during an interview in his apartment in the city’s Rosengård neighbourhood.

The man believes he and his friends have better knowledge of the area where the shootings have taken place and will likely find the gunman before the police.

“It will be much easier for us to catch him than for the police,” he told the newspaper.

At a Monday morning afternoon press briefing, police in Malmö expressed urged concerned citizens to leave the investigation to the police.

“It’s totally reprehensible. You can’t have that in a society governed by the rule of law; it’s the job of the police to uphold law and order.”

Sjöholm added that a number of false alarms had come in at the weekend.

“We received calls about a number of shootings that didn’t turn out to be shootings,” he said.

He explained that a special investigative group was launched after police concluded that several unexplained shootings in the city may be related.

“We’ve gone through the shootings we’ve had. When we realized it could be the same perpetrator we decided to launch this investigation. We’re talking about 15 shootings or so in the span of a year,” he said.

However four additional shootings have taken place since the investigation began which have been added to the original 15 incidents.

Altogether eight people have been injured, and one killed in the shootings.

“We don’t want to say exactly which shootings,” he said.

Sjöholm also commented on the weapons believed to be used in the shootings.

“We’ve confirmed that a number of weapons have been used in several shootings,” he said, although he refused to confirm how many shootings may be tied to the same gun.

Sjöholm also explained that police believe they are hunting a single individual.

“The profiling group has gone through all the shootings and things there is a strong grounds to believe it’s the work of one and the same assailant, but we can’t let ourselves get locked into that,” he said.

Police nevertheless hope they have secured DNA evidence from a man who beat and eventually fired a shot at a tailor and hairdresser in the Augustenborg district on Saturday night.

“The tailor was headbutted, so we’ve taken swabs, taken clothing and samples. We’ll send them over to the National Forensics Lab straight away tomorrow morning for analysis,” Ewa-Gun Westford of the Malmö police told the Aftonbladet newspaper on Sunday evening.

Police in Skåne county received a number of calls about suspected shootings on Sunday night.

“Since 8pm, we’ve had eight or ten calls. We’ve gone out to all of them, but nothing has proven to be acute,” police spokesperson Sofie Österheim told the TT news agency.

Tensions in the city remain high as one young women learned on Sunday night when she was stopped by two police officers at Nobeltorget square.

“A caller warned of a woman wearing dark clothes and shorts who had a holster on her thigh with a gun in it,” said Calle Persson of the Skåne county police.

It turned out that the woman was on her way to a costume party.

“We pointed out to her that her clothing was in appropriate,” said Persson.