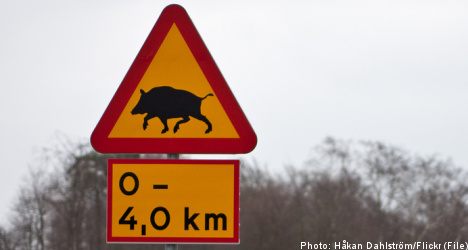 “He was bloody when I arrived,” hunting team leader Erling Thorstensson told the Aftonbladet newspaper in describing the attack on his hunting companion.

The forest’s thick underbrush and tightly packed saplings made it difficult for Thorstensson and his fellow hunters to see exactly what had caused their dogs to start barking as they made their way through the woods near the Ems herrgård estate outside of Mönsterås in southeastern Sweden on Sunday.

The ten or so hunters expected to see a lumbering elk emerge from the trees as the dogs worked to flush out the beast.

But instead of an elk, a huge wild boar appeared and raced toward the team’s dog handler, catching the dumbstruck hunters by surprise.

Before any of them could raise their guns, the boar had already put a sizeable gash in their friend’s leg.

“The boar attacked and tore up his leg with his powerful tusks,” said Thorstensson.

The wounded hunter managed to make it to a nearby path under his own power before his fellow hunters came to his aid.

The hunt was subsequently broken off and the injured man was taken to hospital in Oskarshamn where he received 16 stitched to repair the wound left by the hostile boar. He is expected to make a full recovery, however.

Later on Sunday, other hunters shot and killed the aggressive boar.

When it was later weighed, the wild beast tipped the scales at 205 kilogrammes, making it among the largest wild boars ever shot in Sweden, according to Aftonbladet.