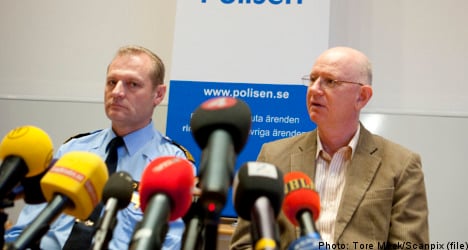 Other reinforcements could follow, Ulf Semper said in a statement.

“We have been promised by the head of the criminal police that all our needs in terms of staff will be satisfied,” he said.

The extra forces were drafted from the Skåne region surrounding Malmö in the southernmost part of Sweden.

Panic has spread in the city since police announced last week they were investigating whether a lone shooter with racist motives was behind some 15 attacks, killing one person and injuring many others and may even have committed unsolved murders dating as far back as 2003.

Police have set up a special task force and profiling unit to deal with the case, but Sempert said the inquiry could take weeks or months.

According to a preliminary profile, the shooter is believed to be a man aged 20 to 40 who probably uses some mode of transport, perhaps a bicycle, to flee the scenes of his attacks.

The recent incidents bear a chilling similarity to the case of an immigrant-shooting sniper in Stockholm in the early 1990s and the Swedish press has quickly dubbed the Malmö shooter “the new Laser Man.”

Laser Man was the nickname given to John Ausonius, who shot 11 people of immigrant origin, killing one, around Stockholm from August 1991 to January 1992.

Ausonius, who got his nickname by initially using rifle equipped with a laser sight, was sentenced to life behind bars in 1994 and remains in prison.