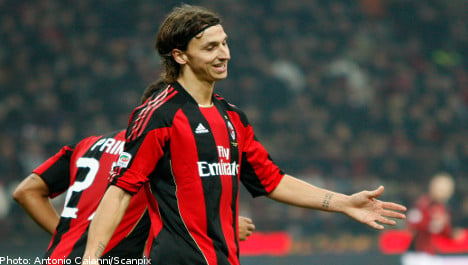 up to fourth in Serie A, just two points behind Milan and three off champions Inter Milan, who won 1-0 at Genoa on Friday, before Zlatan Ibrahimovic’s late consolation.

Juventus’s win came amid a crippling injury crisis, made even worse as Juve lost Giorgio Chiellini in the warm-up and Paolo De Ceglie and Jorge Martinez during the game.

They ended it with right winger Simone Pepe playing at left back and defensive midfielder Momo Sissoko at right midfield.

Del Piero’s goal was his 179th for Juventus and means he becomes their record goalscorer, with one more than Giampiero Boniperti.

“We’ve got seven lives, we’ve reclaimed an important position (one that earns Champions League qualification) but we can’t rest on our laurels,” he said.

“We’re in the league to try to win but our aim is to improve from one Sunday to the next.”

Milan boss Massimiliano Allegri said they had not deserved to lose.

“We played well, we created many chances but we gave away some opportunities by losing the ball too easily,” he said.

“We’re talking about a game in which the result doesn’t reflect the game on the pitch, but that’s football. We didn’t deserve to lose.”

Ibrahimovic came close to giving Milan an early lead but his curler smacked back off the bar.

But Quagliarella opened the scoring on 24 minutes when he met a deep De Ceglie cross with a towering header into the top corner.

Milan’s Andrea Pirlo had a free-kick deflected just past the angle of post and bar before Juve countered at pace on 29 minutes after a slip by Alessandro Nesta, but Christian Abbiati scrambled Del Piero’s scuffed shot around the post.

Milan finally threatened in stoppage time as a great cross from Pato into the area picked out Ibrahimovic but the Swede’s header was weak and Marco Storari made an easy save.

Ibrahimovic then took down a cross from Pirlo on his chest before firing over.

Five minutes into the second period the Swede had another chance, teed up by Ghana midfielder Kevin-Prince Boateng but Felipe Melo headed his shot clear.

But despite those chances it was Juventus who struck again after Pepe crossed into the box and Sissoko beat Luca Antonini to the ball bringing it down on his chest before it got stuck in his feet.

The chance seemed to have gone begging after the Mali midfielder swiped at thin air and fell over, but he got back up, prodded the ball back to Del Piero and he fired through a crowd of defenders to score.

Earlier in the day, Roma went seventh ahead of Sunday’s matches after a 2-0

success against Lecce in the capital saw them earn a third home win in a row.

Argentina centre-back Nicolas Burdisso and Montenegro forward Mirko Vucinic scored the goals but both teams finished with 10 men after the dismissals of Francesco Totti and Ruben Olivera.

But Roma were counting the cost of Totti’s dismisal as he will now miss next week’s Rome derby against leaders Lazio.

“Of course it will hurt us a lot, not just for what he does on the pitch but for what he means to all of us,” said Burdisso.

Burdisso opened the scoring on 62 minutes as he rose in the box to head John Arne Riise’s deep cross into the top corner.

Vucinic settled the game on 76 minutes after being released down the left by Totti, firing low into the far corner past goalkeeper Antonio Rosati.