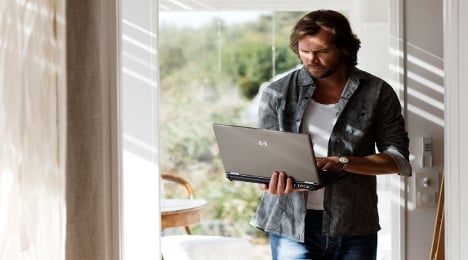 “Turn the noise down”, and “no trash in the stairwell, thanks” are two examples of wireless networks included in the Telia survey in what has been dubbed “Angry note 2.0”.

“Broadband names are starting to replace the angry note in the lift or in the communal laundry room, perhaps because it removes the possibility of actually running into a neighbour,” said Ola Karlsson, who is one of the judges in a competition launched to find Sweden’s best broadband network name.

Further examples of terse messages that may appear in a wireless assistant window include: “thank you for not smoking on the balcony”, “pay for your own internet, you stupid neighbour”, and the classic laundry room whine, “remove the fluff from the filter”.

However not all the creative wireless network names are mere complaints, with several of a more inquisitive, discursive, or giving nature such as: “PrettyFlyforaWiFi”, “If you can read this, you are too close”, “I live in a field”, and “everyone is called Glenn in Gothenburg”.

One of the front runners in the Telia competition: “have you got 6 eggs? Put them by the laundry room and I’ll put some new ones there tomorrow”, is apparently motivated by the same desire to avoid actually having to engage in physical interaction.

“This is as yet new ground for research, which makes it a lot of fun to follow the new names which are entered into the competition. Particularly because we discovered new mini-trends – from local behaviour such as the angry notes, to points of view against or for world phenomena,” said Stefan Trampus at Telia.

The competition “Map broadband” (Kartbredband) will run until November 7th, after which the winner will be announced by a jury which aside from Ola Karlsson and Stefan Trampus, includes musician Salem al Fakir and writer/blogger Johanna Öhberg.