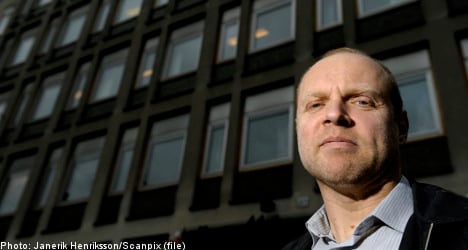 At the same time, the number of complaints that police receive about stock scams has also increased.

“There is an enormous amount of activity right now. It is actually due to a couple of new fake companies every day,” said Jan Green, an expert on so-called investment fraud at the Swedish Financial Supervisory Authority (Finansinspektionen, FI).

Fraudulent brokers contact their victims with lucrative offers, usually about investing in unlisted American companies where future prospects are described as excellent. In reality, the shares are generally worthless.

However, fraudsters do not just only pretend to be stockbrokers. On the warning list, there are also a large number of false authorities. They contact people that they have previously enticed to buy shares and offer various ways to help them – for a hefty fee, of course.

Recently, Luxembourg’s financial supervisory authority issued a warning for a fake version of its website.

“They are downright uncanny because they are well made websites that look good. Unfortunately, many actually fall for them,” said Green.

Stock fraudsters also follow the latest trends prevalent in the legitimate financial industry. Currently, as a result of the rise in gold prices, companies often offer trade in gold futures or shares in mining companies. There are even complete but false commodity exchanges on the internet.

“The terrible thing is that they succeed. They get people to bite into them,” said Green.

Police can attest to the economic boom for stock swindlers. The extreme workload at the specialist unit at the Stockholm county police combating investment fraud resulted in the safety ombudsman closing down the division last week.

“They are terribly active right now. Many will be contacted,” said Detective Inspector Peter Sundman, who has now resumed his work.

The group of four policemen led by Detective Superintendent Bernt Isaksson is currently working on five large investigations covering a total of a couple thousand claimants.

Another 200 cases remain high in the so-called balance. On top of that, the unit is contact by new victims on a daily basis.

“On average, we get at least four to eight calls a day,” said Sundman.