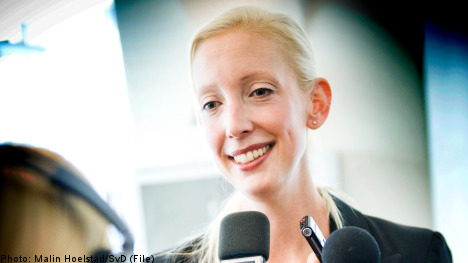 Director of Public Prosecution Gunnar Stetler, head of Sweden’s National Anti-Corruption Unit (Korruptionsenheten), said at a press conference on Monday that there is no reason to believe a crime has been committed that is worthy of public prosecution.

The decision comes just days after it was revealed that Arkelsten accepted a trip to the south of France sponsored by Dutch oil company Shell two years ago. At the time, she was a member of the Riksdag and served as the Moderate Party’s spokeswoman on climate and environmental issues.

Revelations about the Shell trip, as well as other sponsored trips taken by Arkelsten, led Stetler to examine whether or not his office should launch a formal investigation into the matter.

“Quite obviously, members of the Riksdag are subject to the rule of law,” Stetler said, referencing Sweden’s laws against corruption and bribery.

“It’s established that others can ‘invite’ Riksdag members on a trip, but they must be justified,” he said, explaining that trips shouldn’t, for example, be too focused on entertainment.

In his decision not to pursue an investigation, Stetler wrote that the place and the context for Arkelsten’s trips appear to be justified and therefore shouldn’t be considered as bribes.

Stetler also took up Arkelsten’s complimentary use of a new BMW for several days in 2008 saying that she “possibly tested,” but didn’t use the car to such an extent to deem the use “unauthorised.”

Arkelsten declined to be interviewed following the announcement, choosing instead to issue a statement through her press secretary.

“It’s good that the prosecutor took a decision and I welcome that we reached a similar judgment. I’ve earlier expressed my regret that it was perceived that I had been unduly influenced,” she said in statement.