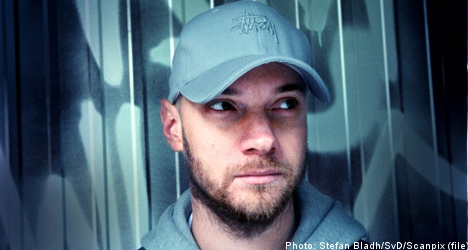 DN culture editor Björn Wiman on Monday removed a version of the popular comic strip Rocky from the newspaper’s website, in which characters in the cartoon referred to “the Jews at Bonnier.”

Bonnier refers to Bonnier Group, a Sweden-based media group and publisher of DN. The group is controlled by the Bonnier family, which is descended from German Jewish immigrants. Alfred Bonnier moved to Sweden in the 1820s and started a publishing empire that has become of the country’s most influential companies.

The strip was originally published in DN’s print edition last summer without incident, but only made its way on to DN’s website on Monday in the paper’s På Stan (On the Town) blog.

Several hours later, the strip was removed, prompting a number of complaints.

“Many [believe] that the anti-Semitic cliché about ‘the Jews at Bonnier’ was used obviously ironically and it was wrong of me to remove the series from DN’s website,” Wiman on his blog on Monday.

“I could probably have worded my motivation better, but the bottom line is that I do not think it was equally clear to many others that the term was used ironically and that the strip would be in this case a funny work mocking anti-Semitic conspiracy theories.”

Wiman explained that unaware readers could have easily missed the cartoon’s irony and instead interpreted the cartoon as containing a purely anti-Semitic message.

“Those who missed it would as such perceive the series as anti-Semitic, even if the intention behind it is the exact opposite. Spread outside the context of DN readers who are acquainted with Rocky, it would become even more difficult to determine. Against this backdrop, it was natural to remove it,” Wiman stated.

Speaking on Monday with the Dagens Media newspaper, Wiman stated clearly that the cartoon “should never have been published. It contained an anti-Semitic message.”

He explained that the comic strip had been published automatically on the På Stan blog, but was removed as soon as he became aware of it.

Wiman blamed the controversial Rocky installment’s original publication in DN’s print edition on the fact that the newspaper’s regular staff was not fully in place during the summer months.

“These are things that happen, but what was also tricky was the anti-Semitic message. They can sneak in under all possible circumstances,” he told Dagens Media.

In the first frame of the strip, Rocky complains to a friend about his problems with women.

“I’m beginning to suspect that it’s the Jews at Bonnier who are behind the fact that all the girls I fall for are evil,” the strip reads.

Rocky then adds that his hypothesis is “just a theory,” that he “could be wrong” and “It could be a coincidence,” prompting his friend to say, “It could be your own fault.”

In the closing frame of the strip, Rocky replies, “It could be my own fault, but things point toward it being the Jews…”

DN is owned by Bonnier, but according to Wiman, he personally decided to remove the strip, authored by artist Martin Kellerman.

“Does it mean I think that Martin Kellerman is anti-Semitic? No. Does that mean that I am a bore? Yes. At least in this case,” he wrote on his blog.

Collaboration with Martin Kellerman has continued as usual, he added.

Rocky is an autobiographical comic strip drawn by artist Martin Kellerman that focusses on an anthropomorphic dog, Rocky, and his friends in Stockholm. Kellerman created the strip after his girlfriend broke up with him and he was fired from his job as a cartoonist for a pornographic magazine.

The strip was initially picked up by the free newspaper Metro 1998 and moved from publication to publication after multiple newspapers cancelled the strip due to reader complaints over profanity and sexual content.

Attempts by The Local to reach Kellerman and Wiman for comment were unsuccessful.