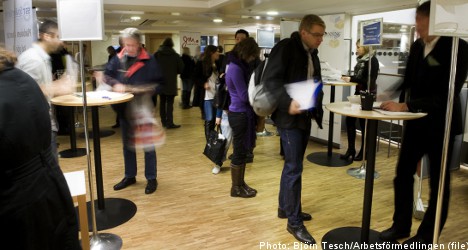 “They over-recruited for an unemployment rate of 12 percent,” Markus Fureberg of university graduate union SSR, which represents the Swedish Public Employment Service (Arbetsförmedligen) in the Saco-s labour group, told magazine Jusektidningen on Tuesday.

Saco-s is a negotiation organisation for state-employed university graduates affiliated with the Swedish Confederation of Professional Associations (Saco).

The agency will not renew the coaches’ contracts when they expire on December 31st, according to human resources manager Annette Ekström.

“This was an investment we made when there were high unemployment rates. Now we see that the times have changed and we made the assessment that the job coaches’ positions do not needed to be extended,” she explained.

According to Ekström, the coaches have not had enough to do, but the agency is pleased with their performance.

“We will continue to work with coaching, both with our own employment officers and with the external coaching companies with which we also have contracts. We will continue to provide the support to our job seekers that they need,” she said.

The change is consistent, according to Furuberg.

“Arbetsförmedlingen has recruited a large number of new employment officers and the organisation is staffed at a higher unemployment rate than we have today,” he pointed out.

Furuberg is also in favour of university-educated employment agents now taking over the coaching.

“Job coaches were appointed without any skill requirements. However, we believe that job coaching is a properly qualified occupation that is worthy of receiving an in-depth matching,” he said.

At the same time, he believes that the employment officers may come under intense pressure when the job coaches leave.

“Arbetsförmedlingen is an authority where there is a lot to do. Now 1,600 hands are disappearing. It will be a challenge to take over after them,” he said.