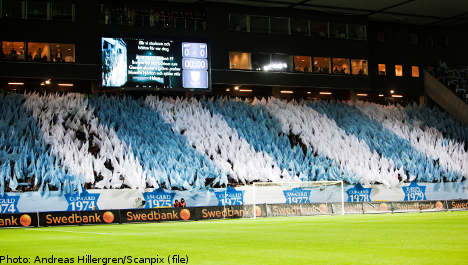 A recent spate of apparently random shootings directed at people with a non-traditionally Swedish appearance, has raised concerns about growing racism in Malmö and across Sweden as a whole.

The shootings, which police continue to investigate, have often been discussed in the context of the difficulties of integration and have tarnished multicultural Malmö’s reputation.

Sporting success this weekend will go some way to shifting that negative focus and highlighting one of Malmö’s most shining examples of the successes of multiculturalism: the city’s only professional football club, Malmö FF.

Malmö FF’s 2010 squad includes players from nine different nations. It also includes a number of key players who represent the myriad of cultures that make up Sweden’s most culturally mixed city, where around 36 percent of the population is registered as having a foreign background.

“It is the team’s success that unites people. One goes along and watches the matches and the team consists of a group of individuals, it is those players that you cheer on,” Marie Holmberg at the city’s tourism office, Malmö Tourism, tells The Local.

“On the pitch (their background) doesn’t mean anything, they are individuals.”

They are all local men with roots in a slew of various countries and cultures, and on Sunday the likes of Agon Mehmeti, Dardan Rexhepi and Guillermo Molins, will line up alongside talismanic captain Daniel Andersson and goalkeeping stalwart Johan Dahlin, united in their goal of bringing Sweden’s Allsvenskan title back to the football-mad city for a record 16th time.

“Malmö has always been a football town, other sports have never meant that much to us. The entire town town revolves around the team, and we have only one where other Swedish cities have numerous,” says loyal Malmö FF supporter Martin Palmer.

Malmö FF leads Sweden’s Allsvenskan, on goal difference ahead of local Skåne rivals Helsingborg. A win on Sunday will secure the “gold” for MFF for a record 16th time (barring a massive win for Helsingborg).

It will also give a welcome boost to the city, which has been in something of a state of shock after the shootings were classified by the police as a having an apparently racist motive.

The tourist office’s Holmberg explains that the success of the women’s football team in winning the national title a fortnight ago, followed by the prospect of a title win for the men’s team on Sunday, is of great benefit to the city, and its image.

“It is naturally very positive for the city for the women to have won the championship and now if the men can bring home the ‘gold’,” she says, adding that football is a unifiying factor for the city.

“I think the team’s success has definitely helped. There are so many people with different backgrounds within this town. Everyone likes MFF, and everyone likes Zlatan (Ibrahimovic),” he says, referring to the Malmö native son who stars for both Sweden’s national side as well as storied Italian football club AC Milan.

The election of the Sweden Democrats to Sweden’s Riksdag on a platform to dramatically cut immigration and challenge the multicultural society, has been cited by some observers as a causal factor behind the shootings, having allowed anti-immigrant sentiment to be aired more freely.

Sweden Democrat leader Jimmie Åkesson is a keen supporter of Mjällby FF, Malmö’s opposition on Sunday. Åkesson, who was born in Skåne, has previously described Sweden’s captain Zlatan Ibrahomivic, as a “bought in” player, and has furthermore questioned his “unSwedish” footballing style, despite the Milan star being born and bred in the country.

When Ibrahimovic broke into Sweden’s national team back in 2001, he was surrounded by established names such as Larsson, Andersson, Svensson and Allbäck. He was seen as little more than a joker in a pack of Swedish organization and did not establish himself in the team until the summer of 2004, the same year he signed for Italian giants Juventus.

Ibrahimovic’s success story from the gravel pitches of one of Malmö’s toughest suburbs Rosengård, to the riches of Milan’s San Siro, serves as an inspiration for Malmö youth seeking to get ahead and better themselves.

Malmö FF midfielder and playmaker Guillermo Molins, who arrived in Sweden as a one-year-old with his parents from Uruguay, coined the phrase “Zlatan effect” when talking to the Dagens Nyheter (DN) daily this week.

“Of course there is a Zlatan effect. His achievements have ensured that we all get a chance,” Molins told DN.

“There is a cockiness among players with foreign roots, another belief in themselves. One should believe in yourself and not listen to much to what others say.”

Palmer, who will take his normal seat alongside a packed house at the Swedbank Stadium in central Malmö on Sunday, says that the players’ backgrounds matter little to the average MFF football fan.

“They are very much seen as Malmö players first, immigrants second. Of course there is the foreign element. But there is such a broad variety of backgrounds. In the end people don’t care, they are so fanatical about the football,” he says.

Malmö’s multicultural players have all been schooled in the Swedish footballing system, with a focus on solid technique, teamwork and organisation. Swedish clubs tend to look to Brazil and Latin American countries when seeking to bring a little flair to their teams, and Malmö’s purchase of Wilton Figueiredo is a case in point.

But the rapid globalisation of football in recent decades, and the changing face of Malmö’s diverse population has had its impact on how the proud residents of the city view their “Himmelsblått” (Sky Blues) and, with half of the national side now made up of “new Swedes”, how the nation views its footballing future.

“It works because it has to work, people are working for the same objective, together. It is a lesson for the city as a whole,” Palmer says.

Malmö FF entertain Mjällby FF at the Swedbank Stadium in Malmö on Sunday, while Helsingborg host Kalmar FF. Both games kick off at 4.30pm.