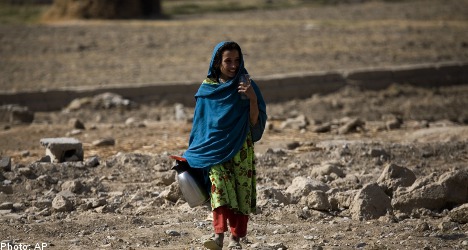 The programme is focused on getting women to participate in decision making.

“Through the village councils, local people will have the opportunity to discuss and decide on important investments that can improve their living conditions,” wrote Eva Johansson, the Swedish International Development Cooperation Agency’s (Styrelsen för Internationaellt Utvecklingssamarbete, Sida) Afghanistan director, in a statement.

Sweden has supported the project since 2006 and contributed to the establishment of 23,000 village councils.

The programme is coordinated by the Ministry of Rural Development and covers all of Afghanistan’s 34 provinces. To date, the programme has initiated 42,000 projects.

“They have dealt with improved roads, wells and school buildings,” wrote Johansson.

The programme has gradually increased its focus on female participation in the decision-making processes at the local and national levels. Part of the aid money will be earmarked to projects that prioritise appointing women on village councils.

This announcement follows the disclosure last month that Sida would contribute 80 million kronor for private sector development in northern Afghanistan, as well as 12 million to the Indian charity Hand in Hand’s work in the region.

Hand in Hand was founded by Swedish business executive Percy Barnevik, who remains a major donor to the organisation. The charity has engaged in work in Afghanistan since 2006 following an invitation from Afghan President Hamid Karzai.

The contribution represents the first investments that Sweden has granted for private sector development in the country, which is a new area of cooperation strategy for Afghanistan and was adopted in summer 2009.

The program will cover the whole country, but Sida’s aid will mainly go to the northern provinces, where Sweden is responsible for security under the UN’s mandate.

The investment is in line with the Afghan government’s first programme for the private sector and will be managed by the World Bank’s development fund for the country.

Sweden’s aid to Afghanistan last year amounted to 588 million kronor. The main focus of the aid was on education, democracy, human rights and equality, but also included humanitarian aid. Private sector development and the northern provinces were also priority areas in the new country strategies.