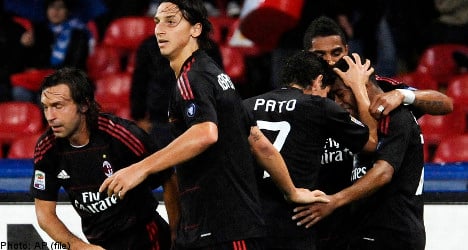 Zlatan cheers with Robinho, Pato and Andrea Pirlo after goal vs. Napoli, Oct. 25

The pair had to be separated by teammates following a fight at the Milanello training complex, Italian news agency Ansa reported on Friday.

The incident was sparked by a hard challenge and bad tackle by Swedish forward Ibrahimovic on American centre-back Oguchi Onyewu. Coach Massimiliano Allegri took the pair to one side and suspended training for a few minutes until things calmed down.

Allegri appeared to change his tune one day later, telling his team to get nastier if it wanted to win anything important this season.

Milan missed out on a vital Champions League victory midweek after conceding a goal four minutes into injury time when Real Madrid snatched a 2-2 draw at the San Siro.

Ahead of Sunday’s trip to Bari, Allegri told his players to stop being so nice, although it appears Ibrahimovic and Onyewu seemed to have read his mind on Friday.

Allegri said a mountain had been made out of a molehill and claimed the pair have kissed and made up, but he still wants something extra from his team.

“In the decisive moments in games, we need a little more malice and calmness in managing the ball in the final third. We’re coming off really tense matches, but we have to improve these situations and also other things,” he said at Saturday’s pre-match press conference.

“It will be a difficult game, we’re coming off a great physical and mental effort, but we have to try to win tomorrow for the standings, we need to rediscover the victory that has been missing for two games,” he continued.

“We’re playing a team that plays well and if we don’t show the right concentration, patience and countermeasures, we’ll have a lot of problems. They’ll play the game of their lives against us, but we need to be intelligent, they’re fresh and have had more time to prepare for the game than us,” he added.

Milan have problems in defence, as both Brazil’s Thiago Silva and Italy’s Luca Antonini have been ruled out with injuries.

Allegri said Colombia’s Mario Yepes would come into the back line for his first game of the season, with Italy’s Ignazio Abate keeping his place at right-back.