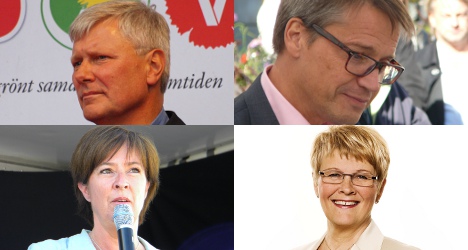 In the case of the Green Party, spokespeople Peter Eriksson and Maria Wetterstrand must resign because of the party’s constitution, which mandates that leaders cannot serve for more than nine years.

MP Gustav Fridolin, who returned to politics in this last election cycle after a four-year break, is tipped to take over, along with party economic spokeswoman Mikaela Valtersson.

Other parties lack suitable challengers for the party leadership.

On Friday, a municipal politician sharply criticised Christian Democrat leader Göran Hägglund in the Kristdemokraten newspaper, saying that he had taken a sudden 180-degree turn since the 2006 election.

However, it is not entirely clear who would take over from Hägglund, who has led the party since 2004.

Similarly, Centre Party leader Maud Olofsson denied that she would resign in the summer after it was noted that she has led the party for nine years.

The most likely scenario would Olofsson allowing herself to be reappointed at the next party meeting, then resigning because she wants to hang onto the leadership, party sources told TT.

Like the Christian Democrats, the party lacks a natural successor.

Meanwhile, the debate on shared leadership and succession is already under way at the Left Party, which narrowly avoided becoming the smallest parliamentary party after the recent elections.

If the party, led by Lars Ohly, cannot win new supporters in the polls, the “demands will increase for the coach’s resignation,” a senior Left Party official told news agency TT on Sunday.

“We have had heated discussions about the election results and we have agreed on a statement to examine shared leadership,” said Carin Högstedt, the Left Party’s Kronoberg district president.

Separately, while many believe Social Democrat leader Mona Sahlin will continue to lead her party in the 2014 election, she has not been able to evade talk of a need for an extraordinary party congress ahead of the next scheduled meeting to challenge her leadership.

As it stands, no senior Social Democrat has demanded her resignation yet.