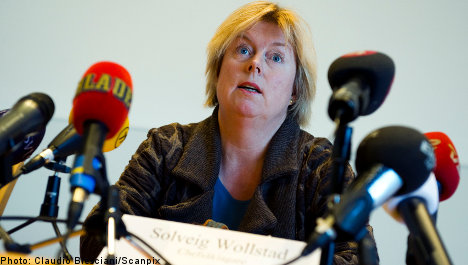 “It is a long way from being concluded,” deputy chief constable Åsa Palmqvist said in a Monday morning press conference.

Palmqvist told reporters that the investigation is ongoing and called on the public for more information.

“We want to continually get in more tips. We need that,” she said.

It has been confirmed that the 38-year-old has been arrested on “probable cause”, the highest level of a three grade suspicion scale used in Sweden.

The man is suspected of one murder in October 2009 and seven attempted murders between then and October 2010.

Police remained on guard at the man’s home on Sunday night after several gangs of curious youths found their way to the location.

“It is all part of the security-building measures we have taken. So that the residents can feel safe,” said the county officer in charge of Skåne and Blekinge police on Sunday night.

The prosecutor and police have been cautious in their public statements over the weekend regarding details of the case. The arrested suspect’s name has not been revealed and police have refrained from officially linking him to what the Swedish press have dubbed “the new laser man”, who may be behind a series of immigrant shootings.

According to media reports on Monday the man is confirmed to be an “ethnic Swede” and the man’s father told the Aftonbladet daily that his son “lived in fear of immigrants taking over Swedish society”.

It has also been confirmed that the 38-year-old, described as a “loner” by neighbours, possessed a licence for two weapons, which police seized during their search.

The search of the man’s apartment on Sunday resulted in a strengthening of the suspicions against the man.

The chief prosecutor Solveig Wollstad has confirmed that the man denies all involvement in the shootings and that a decision over whether to charge him will be taken on Tuesday.

The arrest comes after a massive Malmö police investigation was launched on October 22nd into whether a lone shooter with racist motives was behind some 15 attacks, killing one person and injuring many others.

Dozens of regional police officers have been dispatched to Malmö to help in the hunt as of late October.

Of the 50 to 60 shootings that have taken place in Malmö over the past year, police consider about 15 of them as “unaccounted for”.

Police have furthermore indicated that the shooter may even have committed unsolved murders dating as far back as 2003.

Authorities said at the time it might take weeks or months to find the perpetrator or perpetrators of the attacks.

“We were interested in him following information obtained from the population,” he said of the suspect.

The October announcement spread panic in the city and a link was quickly made with a spate of racist attacks carried out with a chilling similarity by an immigrant-shooting sniper in Stockholm in the early 1990s dubbed “Laser Man”.

“Laser Man” was the nickname given to John Ausonius, who shot 11 people of immigrant origin, killing one, around Stockholm from August 1991 to January

Trez Persson, 20, was killed last October when someone fired numerous shots into the car she was sitting in with a friend, a man of immigrant origin, who was seriously injured in the attack.

In October alone, numerous shootings appear linked to the case, including two men shot in the back, a week apart, as they waited alone in the dark at separate, isolated bus stops.