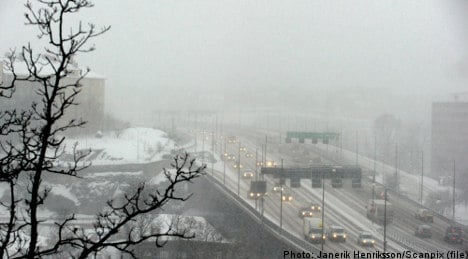 The woman, who is reported to be in her twenties, died when her car collided with another vehicle on road 182 between Vårgårda and Annelund on Tuesday morning. The male driver of the other car sustained relatively minor injuries in the accident, according to Alingsås hospital.

Sweden’s main meteorological agency, SMHI, has issued a class two (in an increasing scale of three) weather warning in Östergötland, Södermanland, Stockholm, Västmanland and Uppsala for the coming days.

The warning means that weather conditions could “involve danger for the general public, significant material damage and major disturbances in key services”.

A bus carrying 30-40 passengers skidded off the road south of Norrköping in eastern Sweden on Tuesday, with a handful of people taken to hospital suffering from minor injuries.

Furthermore the slippery conditions have led to an increase in people with arm and leg fractures have been brought into Kärn hospital in Skövde.

“It is more than usual and concerns people who have slipped,” said Ulf Sahlén at the hospital.

Alexandra Ohlsson, duty meteorologist at SMHI, has called on road-users to exercise care.

“One should be careful when you go out, especially on the roads,” she said.

The adverse weather front is moving north through Sweden on Tuesday and is this evening expected to cause heavy snowfalls in eastern parts of Norrland.

“Persistent snowfalls will continue during the day, especially in areas where we have issued a class 2 warning – from north-eastern Götaland to eastern Svealand. Although snowfalls are also expected on the western side of Lake Vättern,” Ohlsson said.

City bus services have been cancelled in Uddevalla, Lidköping and Borås, with several traffic accidents reported in the Sjuhärad area of western Sweden.

Weather problems are not limited to the roads, with a French-owned oil tanker having run aground off Hävringe outside of Oxelösund, south of Stockholm.

The shipped has heeled, but is on its way into Oxelösund harbour and no oil is reported to have been spilled into the Baltic Sea.

SMHI has forecast that the wintry weather is set to persist throughout Tuesday and Wednesday, with clear skies expected around Stockholm and eastern Sweden on Thursday.