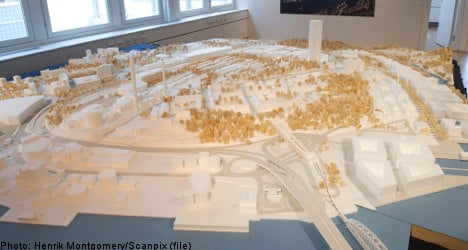 Model of Royal Seaport Innovation at the project's launch in Stockholm, February

Special courses would also be offered so residents could learn the latest in green-living techniques.

“Living environmentally smart is obviously the most important part of the project. However, the social dimension is also included in order to create a sense of connection, as well as arranging meeting places where people can meet and get to know the community,” environmental and sustainability strategist Tomas Gustafsson told DN.

The new city council passed through an environmental programme for Stockholm’s new prestige project with virtually no debate. Those who move in must, according to the city of Stockholm, understand the aims and become actively involved.

“A hypothetical individual could ignore these guidelines, but people do not work like that,” Stockholm vice mayor for the elderly and urban development Joakim Larsson, who is also the chairman of the development committee that is coordinating the project, told the newspaper.

Stockholmers are very environmentally conscious and many are interested in such a lifestyle, Larsson believes.

It will not be enough to simply build energy-efficient homes, find smart solutions and supply a strong public transportation system in order to achieve the ambitious goals outlined by city politicians.

Construction on the initial approximately 700 homes in the Hjorthagen area in Stockholm’s northeast opposite the island of Lidingö began this year and the first residents are scheduled to move into the district in 2012. The project is expected to be completed in 2025.

A total of about 5,000 homes will be built in the area, in addition to services and commercial activities. Hjorthagen currently has about 2,200 residents and is served by the red Stockholm metro line to Ropsten station.

The development is on a former brownfield industrial area encompassing 236 hectares and is currently one of Europe’s largest urban development projects. The Royal Seaport is a model for the future of Stockholm, Larsson added.

“Hammarby Sjöstad has boosted the city’s reputation significantly, even internationally, but it is now almost a little like old news. With the Royal Seaport, we want to show off and market Stockholm at the forefront,” he said.

Residents of the new district will receive help from a “residents’ school” (Boskolan), area ambassadors, networks and different activities to take part in its environmental profile.

“People will receive help along the way. When one buys a technical gadget, one receives a comprehensive instruction book, but it usually does not come with a new resident when one moves into an apartment,” said Gustafsson.

In addition to learning about technical solutions such as how to use a garbage disposer, measure the amount of much water one uses and rubbish one throws away, since it is charged individually, the Boskolan will also deal with healthy eating and how to buy eco-friendly goods.

Public health and exercise are part of the sustainable lifestyle for the Royal Seaport. Every resident will be offered a personalised itinerary to and from work. The nature areas of a nearby national park will be used for health-oriented activities. Cars, boats and canoes can be rented, as well as tents and backpacks for hikers.

The city is also planning for only an average of half a parking space per apartment to discourage car ownership.

“We believe very much in carpooling. I see a change both in technology and in people’s habits,” said Gustafsson.