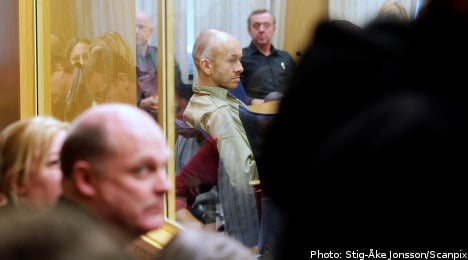 Among the unsolved cases are two murders which took place in the Lindängen neighbourhood of Malmö in 2003. Both the victims had immigrant backgrounds, the Svenska Dagbladet (SvD) newspaper reports.

One of the murdered men received a mysterious phone call from a shooting club, according to the victim’s son. Police are interested in the conversation because Mangs was a member of the same shooting club in Malmö.

Mangs was arrested on Saturday after a tip from a member of the public. Police have confirmed only his age, that he “has a Swedish background” and that he does not have any previous criminal convictions.

A possible motive for the attacks has not been released by the police, but Mangs’ father was quoted by the Aftonbladet daily on Monday as saying that his son “lived in fear of immigrants taking over Swedish society.”

On Tuesday, Mangs was remanded in custody on suspicion of one murder and five attempted murders. He has continually denied the charges against him.

Prosecutor Solveig Wollstad said at a press conference on Tuesday afternoon that suspicions against Mangs had strengthened and that he remains suspected for a further two attempted murders which were not addressed in the remand hearing.

But police nevertheless remain tight-lipped about the ongoing investigation. Lars Mahler, a detective with the Malmö police, cited a court sanctioned non-disclosure order in refusing to elaborate on reports that Mangs might be connected with the 2003 killings.

“Generally speaking, we’d like to see all crimes get solved. If there is a possibility of doing so, obviously we’re going to try to do so,” he told the TT news agency.

The fact that seven years have passed since the two unsolved murders took place shouldn’t pose any problems for continuing the investigation.

“Everything depends on which leads we have to act on. An opening can occur pretty quickly, for example through a seizure or someone suddenly starting to talk. There are always possibilities to clear up a crime,” said Mahler.

The older murders have much in common with the recent Malmö shootings Mangs is suspected of carrying out.

In mid-June 2003, a 66-year-old man was found shot in his apartment in Lindängen. About a month later, at the end of July, a 23-year-old man was shot dead outside his home when he was on his way to work.

The men had immigrant backgrounds and were completely unknown to the police. Both had lived quiet, unassuming lives in the same neighbourhood.

Both were shot with a 9-millimetre gun.

But there are also differences, between both the 2003 killings and the recent shootings which have kept Malmö on edge for several weeks.

The older man who was shot in 2003 was also robbed and his bank card used to withdraw money from his account. But the 23-year-old victim’s wallet was found beside him, untouched.

Due to a lack of evidence, police began to investigate the killings as one case, and the national police profiling group was also brought in to assist in the case.