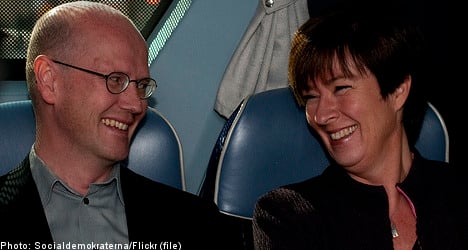 “That’s the answer we have been waiting for. It is an important statement,” said the Social Democratic Youth League (Socialdemokratiska Ungdomsförbundet) Chairwoman Jytte Guteland told news agency TT.

“A newly elected executive committee and board will give us gives a leadership for the party that can stand up for a new policy,” she added.

Throughout the day, an increasing number of party members echoed her sentiments. The party’s youth wing was supported by Håkan Juholt, who also sits on the board, as well as the Social Democrats’ chairman in Blekinge, Mats Johansson, also sided with the youth wing.

“It is a reasonable demand,” he said, implying that after the election defeat, the party must look at not only at its policies, but also at the organisation and its lineup.

“The situation is critical,” added Johansson.

However, he would not go into how important it is for leaders to be replaced, noting that everyone in leadership positions in the party, not just Sahlin, were responsible for the defeat.

Four fatal mistakes costed the left-leaning coalition the election, according to a leading Social Democrat politician: the reintroduction of property taxes, higher gas taxes, a halving of the restaurant tax and lower taxes for pensioners.

“We had an advantage of 18 percentage points in the polls before we entered an alliance with the Left and Green Parties; we quickly lost ground in connection with building up the alliance,” said Morgan Johansson, who is a member of parliament and heads one the Social Democrats’ post-election analysis groups, to the Sydsvenskan daily.

“However, we could have won the election anyway – if we did not make these crucial blunders,” he said.

Johansson called the proposal for the reintroduction of a property tax “foolish” because it would have given the public treasury only 300 million kronor ($44.38 million).

Meanwhile, the proposal on reduced restaurant taxes was a “group snap decision” by all the party leaders, who were deceived into believing that it would create 10,000 new jobs.

Furthermore, Johansson argued that the election campaign largesse offered to Sweden’s pensioners had only a limited impact at the polls.

“Our huge election promise to pensioners resulted in a very small positive mark on voter opinion,” he said, arguing that the party leadership grossly underestimated the importance of voter opinion.

He added that the party’s executive committee bears a heavy responsibility for the loss, but singled out economic spokesman Thomas Östros in particular.

“If one looks at the issues that determined the election, tax issues weighed heavily. This is where Thomas Östros carries a large responsibility, it has to be said,” said Johansson.

Johansson is not alone in openly criticising the upper echelons of a party that has governed Sweden for the greater part of the past 80 years.

“The image of the party as an inflexible and conservative power elite is perhaps the party’s greatest enemy,” wrote Ardalan Shekarabi and Anna Johansson, who lead the Social Democrats’ crisis commission, in an opinion article in the Dagens Nyheter daily on Wednesday.

They are supported by Håkan Juholt who sits on the board and now the Social Democrats’ chairman in Blekinge, Mats Johansson.

According to political scientist and Social Democrat Stig-Björn Ljunggren, the opening salvoes of criticism have now sparked a war within the Social Democrats.

Ljunggren argued that a demand by the party’s youth league that the entire party executive committee must make their positions available, as well as several outbursts by leading Social Democrats such as Ylva Johansson and Morgan Johansson, are indications of this development.

“Now, the long knives will come out. ‘Blame game‘ is one way of putting it, another is that it is payback,” Ljunggren told news agency TT.

He believes that the months leading up to the party’s extraordinary congress may turn bloody for the Social Democrats, which he describes as several different parties within a coalition.

Ljunggren does not think that the time available until the next election is sufficient for the party to make a fresh start.

“Not as it stands now. They even seem to have difficulty determining what the problem is. Paradoxically, the crisis is so big that there is a underlying unity. That is why no one has gone after [party leader] Mona [Sahlin] yet because everyone realises that that will be the moment when full chaos erupts,” he said.

The party’s executive committee has convened in recent days and, according to several sources, some heated discussions have ensued. This comes as no surprise to Ljunggren.

“The party leadership has probably begun to realize that it was too passive and now others are taking the initiative. However, it is not a group that takes the initiative without many taking advantage of the vacuum. Mona seems to have taken a timeout and now the mice are coming out to play,” he said.