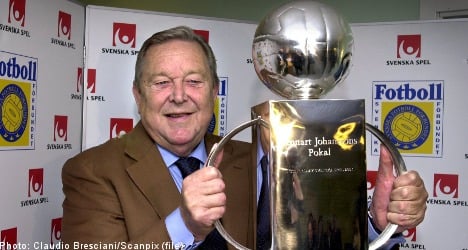 The association has responded to claims that silversmith Ingemar Eklund, a lifelong fan of Hammarby FF, inscribed the inside of the ball that adorns the top of the trophy with the words “Bajen forever.”

“We will open the trophy and have a look to see if there is a message or not,” association chairman Lars-Åke Lagrell told The Local on Wednesday.

When the news first emerged last week, ahead of the 2010 championship climax, Lagrell initially said that no inspection of the trophy would be made, but changed his tune after consulting with the association’s secretary general Mikael Santoft.

“It’s a small problem. We can’t have any message in a trophy, so it’s very easy – if there is something in there, we will remove it. If not, we will tell the papers that it is as it was before,” Lagrell told The Local.

Hammarby Fotboll club, located in southern Stockholm, adopted the nickname “Bajen” as a short form of a mock English pronunciation of Hammarby. The club has won the Allsvenskan only once in its long history, in 2001 – the same year the trophy was established.

The trophy is named after Swede and former UEFA president Lennart Johansson, who governed the football body from 1990 to 2007.

The inscription was allegedly made by silversmith Ingemar Eklund, who has since died, and the secret was revealed by his colleague Peter Gustafsson last Thursday.

The trophy is currently in southern Sweden in the hands of reigning champions Malmö FF, who won on Sunday, but as soon as it returns to Stockholm, it will be taken to a professional who will be commissioned to open it.

“The trophy is in Malmö right now. It will come back to Stockholm to the Swedish FA [Football Association], but we are not in a hurry,” said Lagrell.

Johansson, who is the honourary chairman of the association, expressed his disapproval when he heard the story of the inscription.

“Tasteless may be a little over the top, but it is not pleasant,” he told the Dagens Nyheter (DN) daily on Tuesday.

“I have said my piece when it comes to this. However, of course I am sure that the tribute to Bajen is inside the trophy,” he told the newspaper.

He also warned that an inspection could be both a difficult and costly procedure that risked destroying the trophy, which weighs six kilograms.

Separately, Eklund’s daughter is also not thrilled with the decision to open the trophy.

“I think that it is a waste of money. Put those thousands of kronor into youth sports instead. It is getting ridiculous now,” Marie Eklund told DN.