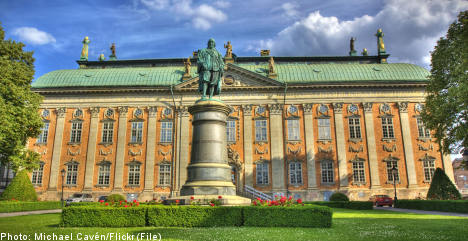 "The House of Nobility (Riddarhuset) in Stockholm"

”Claiming family descent and the rights to a name through the female side (of the family) is not geneologically correct,” explained House of Nobility geneologist Per Nordenval.

The desired name, Lillie af Aspenäs, existed in Sweden until it died out in June 1839, according to the House of Nobility, and is included as a noble name according to their register.

The House of Nobility recorded its objections after responding to a public notice, which is standard procedure by the Swedish Patent and Registration Office (Patent och registeringsverket – PRV), the government agency responsible for ruling on name changes, in cases of unusual names.

”We publish the names via our webpage and then there is a month when objections can be registered,” Jan Ottosson, a lawyer at the Patent Office, explained to The Local on Thursday.

”The House of Nobility tends to object to nobel names as a matter of course,” he added.

The Patent Office bases its decisions in the Swedish naming law (namnlagen). Under the stipulations of the law surnames are divided into two categories – names that already exist and new names, which are then tried against a series of legal requirements.

”In this case it was ruled that since the name had existed historically, it could not be considered a new name which thus removed a number of legal factors that would prevent its approval,” Ottosson said.

The House of Nobility however argued that even if the name is not considered to be a new name under the law – a decision it described as ”remarkable” – as the name exists in the Swedish biographical dictionary, it is ”generally known” and thus should be rejected.

But in this case, PRV decided that as the name had died out it was no longer known and should not be considered alongside more familiar historical figures.

”If you take a name like Vasa for example, everybody knows that name and so it can’t be approved. And I think most people would agree that we can not all be called Bernadotte,” Ottosson said, referring to King Gustav Vasa (1521-1560), and the family name of the reigning Swedish monarch.

Jan Ottosson told The Local that the case remains open and that if no further appeals are submitted, then a decision is likely to be made next week.

“But even if the name is approved, it confers no status of nobility – many people forget that.”

SKATTEVERKET
What’s a Swedish ‘coordination number’ and why do I need one?
Url copied to clipboard!