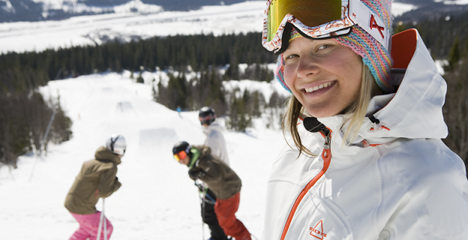 Jämtland lies in northern Sweden directly below Lapland and borders Norway. Östersund, the largest city in the region, lies directly between Trondheim, Norway and Örnsköldsvik on the east coast.

Jämtland is in many ways the heart of Sweden. The largest city in the province, Östersund, is not only located in the middle of Jämtland, but also the middle of Sweden and even Scandinavia.

Jämtland was originally an autonomous peasant republic, a self-governing nation with its own laws, currency and parliament. It was conquered by Norway in 1178 and remained under Norwegian control until it was ceded to Sweden in 1645. Swedish King Carl XVI Gustaf became the Duke of Jämtland after his christening, a title he still retains.

Jämtland is an ideal destination for winter lovers. Östersund is known as the Winter City and has a long history of outdoor activities through the season. Its top-flight cross-country skiing stadium is known for its unique topography and has hosted several world championships in biathlon, speed skating and ski orienteering.

Many of Sweden's top cross-country skiers and biathletes live in Östersund, where they can take advantage of nearly 90 kilometres of well maintained ski trails that are lit at night. In addition, the city boasts an actual cross-country skiing piste in the city itself. Östersund has bid for the Winter Olympics several times with neighbouring Åre.

Despite the snowy conditions in the winter, the city is much warmer than most locations at similar latitudes thanks to the gulf stream and many passages in the mountain range bringing warmer Atlantic winds. The average low in the winter never dips below -10, while the coldest average high is about -5. As such, Östersund is a pleasant city in which to stroll outside even in the winter and there is much to see.

The cold Arctic winds that occasionally find their way to the city are called Nordvästan (the northwesterner) or Kallvästan (cold-westerner) locally.

Östersund was planned as a green city and large green parks are still prominent in the core, as well as its numerous "spice garden lots," or kryddgårdstomter.

In the late 19th century, homes were primarily made of wood, though stone had become popular in the central parts and reflected Neo-Gothic and Neo-Renaissance styles, with towers, some resembling old castles.

By the early 20th century, stone had replaced wood and Art Nouveau became popular in addition to the National Romantic style. Stortorget, the main town square, is one of six "closed squares" built in Sweden. It recreated an open-air feel reminiscent of the Renaissance and has since expanded towards the lake.

In addition to the City Hall, built in the National Romantic style, a more recent city landmark is Arctura, named after Jämtland's provincial star Arcturus. The large hot water accumulator tank is also known as Termosen ("The Thermos"). At night, the 65-metre building is illuminated to emulate the sunrise and Aurora Borealis.

The city has many cafés, bars, pubs and nightclubs reflecting its long café tradition. One of them is said to have invented the Swedish "sandwich cake," a calorific savoury treat involving bread, eggs, lashings of mayonnaise and fillings such as shrimp, ham and liver pâté.

Eighty kilometres to the west lies Åre, one of Sweden's most popular ski resorts. It was named the world's top ski resort by Condé Nast Traveller last year and is popular among both Norwegian and Swedish royalty. With an elevation of 1,420 metres, the absolute summit is reachable only by snowmobile.

Tourism began in 1882 when King Oscar II built the railroad to Trondheim, Norway. The resort, 350 kilometres south of the Arctic Circle, also offers night skiing and boasts a 1.6-kilometre T-bar lift, the world's longest, at Gunnilliften, an area for families with small children.

Hotel Älgen – adjacent to the central railway station, located in the city center.

The Hotel Älgen, located near the train station, also operates the Boarding House Björnen. It has nice, large rooms, a sauna and includes a good buffet breakfast. Weekend rates start at 595 kronor for single rooms.

Hotel Zäta – located in the heart of the city center on a pleasant pedestrian street.

The Holiday Club in centre Åre has a water park, spa, bowling and other great activities for the whole family. After hours, Åre's nightlife and shopping are just outdoors. Accommodation includes hotel rooms, luxury apartments and hotel suites. Winter packages start at 770 kronor per person per night, while studios start at 800 kronor a night.

Take the train to Jämtland

Daily night service is also available leaving Gothenburg at 7pm and Stockholm at 11.50pm, arriving in Östersund at 6.58am and Åre at 8.22am. Additional trains on Fridays and Sundays leave from Copenhagen at 5.03pm and Malmö at 5.38pm.

Trains to Åre leave twice a day from Östersund at 7.14am and 4.24pm for the one-hour journey.