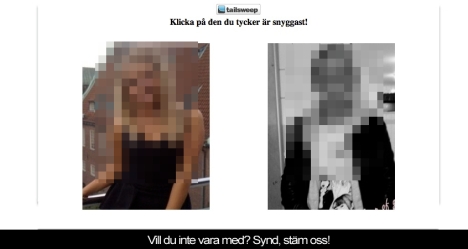 The images of the girls, the majority of whom were 16 to 18 years old, were copied from their Facebook sites without permission.

Apparently inspired by a scene from “The Social Network,” a film detailing the founding of the popular social networking site Facebook, the Swedish site presents users with pictures of two young women and allows users to vote on which one they find more attractive.

Girls who receive the most votes end up on a “Hot List,” while those who don’t get votes are relegated to an “Ugly List.”

“You don’t want to be included? Too bad. Sue us!” read a message on the website acknowledging that the images were being used without consent.

By Friday afternoon, however, the site had been taken down.

According to Anders Ahlqvist from the IT-crimes department of Sweden’s National Bureau of Investigation (Rikskriminalpolisen), the site violates Sweden’s law governing the use of personal information (Personuppgiftslagen – PUL).

“Copying pictures from a Facebook account and then publishing them somewhere else without that person’s permission is against the law,” Ahlqvist told The Local on Friday.

While Ahlqvist hadn’t seen the site himself, he said it was “quite clear” from media reports that it failed to conform with Swedish law.

He theorised that the controversy surrounding the site likely caused either the creator of the site or someone involved in hosting the site to take it down.

The site was up for less than 48 hours and the photos displayed consisted of the usual portraits common on Facebook and were free of nudity or pornographic content.

Nevertheless, the reputations and self-images of many girls in Borås had already been affected.

“It really hurt and it feels like this is something that will follow me for a long time,” one 17-year-old girl who ended up on the “Ugly List” told BT.

“I don’t want to go to class and show myself and think about all the guys who could have sat in the computer lab and clicked on me.”

Maria Gustafsson heads the Sven Eriksonsgymnasiet high school, one of several Borås high schools with students who ended up on the site.

“They feel violated and exploited at having their pictures used in that context without their permission.”

Gustafsson said she has already filed a formal report with the police, while the school considers how to address the situation.

“Students who need our support will certainly get it,” she said.

“We’re also thinking more about how we can educate our students about the risks of putting personal information on the internet.”

Police are now investigating who is behind the site and if the involved parties have engaged in criminal acts.

Possible criminal charges that may apply include harassment, defamation or breach of the personal data act.