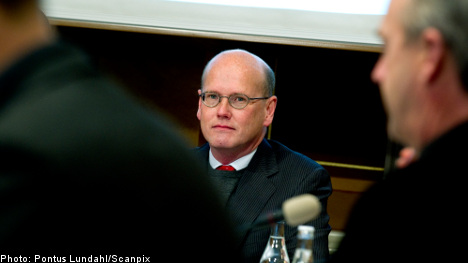 Less than three weeks ago the party presented a joint budget proposal with the Green and Left parties, including a proposal to re-introduce property taxes, abolished by the Alliance government.

“We lose a redistributive policy tool but on the other hand we don’t create a great deal of concern among the people,” Östros told the Dagens Nyheter daily in stating his opposition to the unpopular tax.

Bjereld explained that the Red-Green cooperation has, at least temporarily, been dissolved, all are free to revisit their positions on past agreements.

A further example of this was a recent opinion article penned by Östros in which he positioned himself more towards the political middle ground than the budget agreement published by the Red-Greens.

“I do not think it is surprising but is a natural consequence and a reinforcement of this position,” Bjereld said.

“The Left Party will be the one who find this the greatest betrayal. But they are already smarting after the Afghanistan agreement. So it will probably be more of a sigh of resignation than anger from that direction,” Bjereld said, regarding the Left Party’s decision to exclude itself from cross-party talks over the Swedish troops stationed in Afghanistan.

Ulla Andersson, economic policy spokesperson for the Left Party, argued that Thomas Östros expressed his personal opinion and not the party.

“I assume that what our parties have agreed in the budget, is what matters,” she said.

“The Social Democrats can continue with their discussions and we shall have to see what they come up with. I hope that it will not be a copy of the Alliance’s policies,” said Ulla Andersson to the TT news agency.