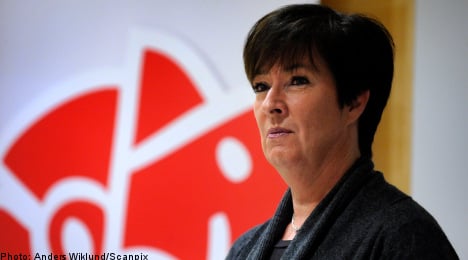 Following a crisis meeting with district party chairs on Sunday, Sahlin emerged to tell reporters that she would not be standing for re-election as party chair at special party congress scheduled for March.

“It’s time for others to have a chance,” she said.

As head of the largest party in the opposition centre-left Red Green coalition, Sahlin ran to become Sweden’s first female prime minister in the September general election, only to see her Social Democrats turn in their worst electoral performance since 1914.

“I have played an important role, now it’s up to others to do so,” she said on Sunday.

Sahlin, 53, has led the party since 2007 and will do so until the upcoming special party congress.

Her decision was “fair and right for me and the party,” she added.

Sunday’s crisis meeting come following a week of speculation and infighting related to the party’s future.

As part of her resignation as party head, Sahlin will also resign her seat in the Riksdag, but continue to be active in the party.

She offered no comment as to who may succeed her.

“But I don’t think everyone should be replaced,” she said.

Party secretary Ibrahim Baylan said he regretted that Sahlin had decided to step down.

Green Party spokesperson Peter Eriksson said that Mona Sahlin did not really have a choice:

“As the situation has developed it was presumably a necessary step that she decided to resign.”

He maintains that Sahlin has been a good colleague and coalition partner.

Peter Esaiasson, a professor in political science, is surprised over the confirmation that Mona Sahlin will not continue as party leader. He said that at the moment there is chaos in the party.

“This is like nothing the party has been through before.”

Academic colleague and Social Democrat Ulf Bjereld argued that the decision is hardly a surprise.

“It means that the party enters a leaderless situation.

He believes that an incredible battle for the leadership of the party is to be expected and that politics is set to take a backseat.

The Social Democratic districts will now have ten days to nominate names to the election committee. It will be appointed on December 4th with the extra party congress to be held in the last week in March.

At 5.10pm Mona Sahlin jumped into a security police vehicle and was driven from the Social Democrat headquarters on Sveavägen in central Stockholm.