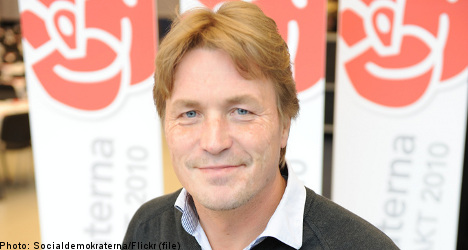 Sahlin announced on Sunday under intense pressure that she will leave her position as party leader at a special party congress scheduled for March.

The popular Wallström became the first-ever special representative of the UN secretary-general on sexual violence in conflict in April.

“I intend to complete my current UN mission, which will be evaluated in March 2012. I am not a candidate for a party leader assignment,” Wallström wrote in a statement.

At the same time, Wallström emphasised her respect for Sahlin’s decisions and regretted the circumstances that led to her resignation: the election defeat in September.

Separately, Bodström, a former justice minister who left Sweden’s parliament, the Riksdag, after the election to move to the US, told evening newspapers on Sunday that he did not want to become party leader.

An earlier poll showed that 34 percent of 1,000 people who voted in the last election preferred Wallström as the new party leader, followed by Bodström.

Meanwhile, newspaper Aftonbladet referred to a Sifo survey earlier this week showing that Bodström had the greatest confidence among leading Social Democrats.

However, Bodström has since confirmed that he is not interested in the job.

“It has never been of interest and will never be of interest,” he told Expressen on Monday.

He added that he was surprised by the news that Sahlin would resign. He declined to comment on what the party should focus on now.

“I do not want to get involved in Swedish politics. I have quit and one does not get involved halfway,” he told Aftonbladet.

Bookmaker Ladbrokes has put the odds on former financial markets minister Sven-Erik Österberg as Sahlin’s most probable successor, with a 3.25 payout if he takes over.

Other candidates with low odds at Ladbrokes include MP and former youth wing leader Mikael Damberg, MP and justice committee chairman Morgan Johansson and former cabinet minister Ylva Johansson. The odds on the party’s finance critic Thomas Östros, who is often mentioned in speculation, was not included.

Another betting company, Unibet, has also tipped the odds in favour of Österberg and Damberg. However, it has given by far the lowest odds, 4.75, to MP Veronica Palm, with a payout on Östros at 30 times.

According to news agency TT, leading Social Democrats had already tried to persuade Sahlin to throw in the towel on Saturday.

Sahlin initiated the emergency meeting on Sunday saying that that she would not run for re-election at the special congress in March, which no one tried to talk her out of.

“It is time for others to take over. The magnitude of what the party must go through now cannot be underestimated. A workers’ party that has just received support from 22 percent of those who are working is enough for me to understand how deep the crisis of confidence is for social democracy,” she said on Sunday.

Sahlin, who entered parliament in 1982 and is used to tough fights, was not untouched when party secretary Ibrahim Baylan expressed his regret over her decision.

She managed to joke that she was at the hairdresser the day before to look nice when she announced her decision.