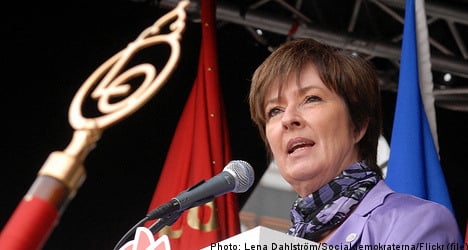 In her 1996 book “Med mina ord” (‘In my words’) Mona Sahlin writes that she wants to offer her own view of “the way into (and out of?) politics”. But after the scandal and timeout of the mid-1990s, she started a new path which carried Swedish politics’ own “comeback kid” all the way to becoming the Social Democrats’ first female party leader.

On Sunday, Sahlin climbed into a black car after the press conference at the party’s headquarters at Sveavägen 68 in Stockholm in which she announced she was stepping down from her post.

This time, the road took her away from the hot air of politics – for good.

Sahlin was in step with the times, an assessment often used in reference to her role model, Olof Palme. She was also the first woman party secretary for the Social Democrats from 1992 – 1994, during which she fostered transparency and modernised how the party functioned.

She forced a slow-moving party to address issues such as feminism, anti-racism, structural discrimination, and LGBT rights. Concrete measures implemented during her time as sustainable development minister (2004-2006) are mentioned less frequently.

Her 2010 book, “Möjligheternas land” (‘The land of opportunity’) is characterized by a modern radicalism at a time of social democratic confusion across Europe.

But in September, the Social Democrats had their worst election since 1914. The causes were many. The confused emergence of formal cooperation within the centre-left Red-Green opposition; the lack of generational change; unclear political priorities; the inability to translate for voters the vague notion of a land of opportunity into concrete reforms.

The clumsy way she handled the post-election debate created a vacuum that was filled by a pressure cooker of speculation. And the turbulence finally forced her to resign.

John F. Kennedy pointed out that the word ‘crisis’ is composed of two characters in Chinese. The first character stands for ‘danger’; the other for ‘opportunity’. Of course, potential can manifest itself now that the crisis of realisation has finally hit the Social Democrats.

The period up to the next extraordinary congress in March will be characterized by tough political recalculations. A strategic renewal will be conducted with experienced, key personnel still in place, but the stalwart politicians of yesteryear will be replaced with new talents. The Social Democratic party will rally around a candidate to take over as party leader who will suddenly seem obvious.

But there are also signs of danger.

For Mona Sahlin’s departure can be seen as an indictment of a deadlocked party apparatus.

Of a party that doesn’t know what it wants and isn’t thinking clearly; of a party that isn’t up to the task of choosing a political path or implementing necessary organizational reforms.

That fritters away political talents.

That doesn’t understand the seriousness of playing power politics so that no one dares to think about how former prime minister Ingvar Carlsson, or a formalist like former defence minister Thage G. Peterson, sighs when they open their morning papers at the kitchen table.

Perhaps Sahlin had a mandate to continue as long as the accusatory spotlight was only focused on her. Did her support disappear when she invited the whole party apparatus to share responsibility and resign their seats?

In the last paragraph of “Med mina ord”, Mona Sahlin leaves the Riksdag and government to the freedom anthem “Oh Freedom”. The Social Democrats seem to need the departing party leader’s advice and stability during the time leading up the next party congress.

But perhaps, when Sahlin drove off in that black car from Sveavägen 68 on Sunday, she played the song again as a foretaste,

However: When we now know that Sahlin will get her freedom in March 2011, 29 years after she entered parliament, another question comes to mind:

Who wants, can, and has the energy to lead the Social Democrats to an election victory in 2014?

Eric Sundström is the editor of the progressive news website Dagens Arena and chair of the Social Democratic Press Association (Socialdemokratiska pressföreningen).

This article was originally published in Swedish on the Dagens Arena website on Monday, November 15th. Translation by The Local.