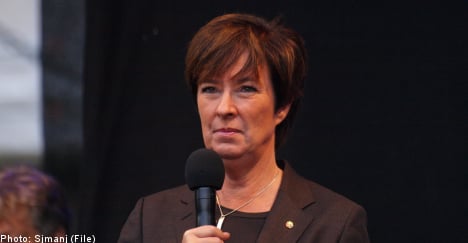 Swedish Social Democracy yesterday became slightly more like a normal European political party. Its leader accepted the consequences of a disastrous election performance and resigned, thus finally concluding a rather weird period in which everyone in the party was looking at each other and waiting for someone else to act.

Mona Sahlin thus notches up a series of records, including that of being the shortest-serving Social Democratic leader ever, and the first of the democratic era not to become prime minister.

Back in September, the Social Democrats suffered their’ worst election result for nearly a century, which will probably presage their longest spell in opposition since they first entered government in 1920.

Immediately afterwards, I was very surprised at the party’s apparent willingness to keep Sahlin as leader (and at her willingness to carry on). My inference was that you should never underestimate the Swedish labour movement’s loyalty to its incumbent leader (or, indeed, Sahlin’s own toughness).

Remarkably, no party figure of any significance ever called for her to go.

But things began to unravel a couple of weeks ago. Even then, the criticisms were coded. Aftonbladet, a newspaper generally supportive of the Social Democrats, described the leadership question as “the elephant in the room”, but left it at that.

The same day, the head of the party’s youth wing – displaying, incidentally, the sort of timing, judgement and luck that bode well for her own political future, and which consistently eluded Sahlin – called on the entire party leadership to put itself up for re-election at a special party congress. Again, she avoided direct criticism of any individual; but her call soon picked up support from high places in the party.

Last week, and without getting clearance from the party’s executive committee or party board, Sahlin declared that she too agreed with this “obvious” step, and that it should be undertaken at a special party congress to be held earlier than expected, perhaps in March next year. Uproar ensued, with Social Democrats openly applauding or criticising her move.

A telephone meeting with the chairs of the party’s regional units on Friday was adjourned until they could all physically meet, yesterday. Then she announced that she would not stand for re-election.

If you ask me, the bottom line is this: West European social democracy has deep-seated problems; the Swedish party is scarcely alone in experiencing hard times at the moment.

Still, the Swedish case does seem to have peculiar difficulty in changing to address these problems – or, to use the usual social democratic parlance, to “renew” itself. The core of this difficulty is leadership, by which I am not chiefly referring to any personal qualities that Sahlin herself may or may not have.

Sahlin’s own period as party chair involved an almost complete lack of leadership. Perhaps this was partly a reaction against her predecessor’s rather heavy-handed style. But it may have more to do with the party’s institutions (defined in a broad sense).

She did manage to pull the Social Democrats’ education policy towards a position that was more in line with most voters’ views. She was also responsible for the decision in 2008 to build a pre-electoral coalition with the two other left-of-centre parties (even if she was forced by her party to include the Left Party in that alliance, which proved electorally catastrophic).

But with regard to other substantive policy areas, especially economics, nothing was achieved – and, even worse, it never became at all clear what Sahlin WANTED to achieve. The manner in which she was selected as leader never involved her having to declare her candidacy, never mind set out a platform for where she wanted to take the party.

The policy-review commissions that she then launched were soon marginalised by inter-party negotiations with the Social Democrats’ alliance partners. Her reaction to the election defeat in September was to call yet another investigative commission, with 50-odd members, fairly junior leaders and a leisurely timetable.

Another odd element in this strange saga is that both Social Democrats and journalists have repeatedly tried to distinguish between debate about policy and debate about leaders – as if the two are not inextricably connected. Political alternatives are packaged and presented by individuals. Their rival packages serve to shape views in a party (or any other organisation) about direction. Choices can then be made.

A rather interesting intra-party conflict broke out late last week, as Sahlin’s authority slipped away. One former Social Democratic minister launched an amazingly personal attack on the party’s shadow finance minister. He responded by trashing the policies that he had previously defended and setting out an alternative economic policy that pitched squarely for the political midfield.

That may be precisely the sort of open debate, with various leadership contenders positioning themselves through outlining their own manifestos, that the party now needs – and which the previous leader-selection process bent over backwards to avoid.

We will see if the new selection committee, which the party council will confirm on December 4th, interprets its mandate in a different way, one that condones a debate between competing candidates – as would be taken for granted in, say, the British Labour Party or even the Danish Social Democratic Party.

In yet another twist to the tale, there is at present no front-runner to replace Sahlin, with, for example, as many as ten possibilities listed in Monday’s Dagens Nyheter.

Dr. Nicholas Aylott, a UK-native, is a senior lecturer in political science at the School of Social Sciences at Södertörn University in Stockholm.