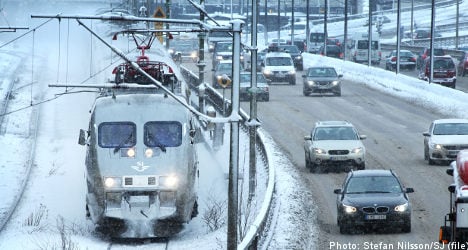 The report is the result of an evaluation of last week’s crisis exercise involving around 30 firms and authorities engaged in the sector, including SJ and the Swedish Transport Administration (Trafikverket).

A staged scenario of winter weather and accidents was acted out and then all those involved in the “Spårsnö” (literally: track snow) exercise were could then account for measures taken.

Several points emerged from the evaluation. Among others it was suggested that rail operators should be invited to a meeting when meteorological agency, SMHI, issues a weather warning.

Further proposals included the installation of cameras to record film from problem areas and that waiting rooms should be kept open longer during delays.

The evaluation showed that there is a need for a coordinated programme of measures which details how all the involved parties have prepared themselves for the snow and cold. This was also a proposal included in a report submitted to the government on October 18th.

Pär-Erik Westin, who led the inquiry and too part in the exercise, considered that everyone is “on guard” for the winter.

“If we get a winter as harsh as last year then it will work better,” he said.

The participants also suggested that a crisis exercise become a recurring feature of preparations for each winter.