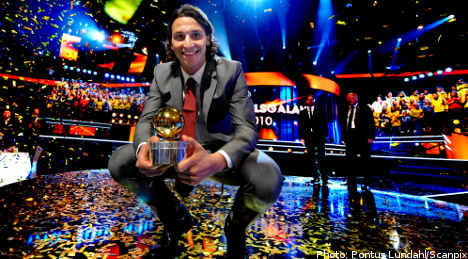 “I will quit on the day I no longer win the Golden Ball,” the Milan striker joked of his record achievement.

Held at the Malmö Arena, there was never any question that the evening was set up to be a hometown festival, and it did not disappoint.

Aside from Malmö-born Ibrahimovic claiming player, and forward, of the year, the southern city’s own Malmö FF claimed the team prize, as did the women’s team.

“It feels great to be in Malmö! Huge thanks to everyone, from players to trainers. And a huge congratulations to Malmö’s men’s and women’s teams. Fantastic,” was the Swedish captain’s summary of the evening.

Roland Nilsson and Martin Sjögren, of Malmö FF and FC Malmö respectively, were the expected winners of the prizes for best trainer.

But the evening belonged to 29-year-old Zlatan Ibrahimovic, who was clearly moved by his achievement and the recognition afforded him by the Swedish football establishment.

“There weren’t that many that believed this would happen when i was 12-years-old and a trialist at MFF. Now 17 years later I have five Golden Balls and two more at home who are hopefully fast asleep,” he said, referring to his two children at home in Milan.