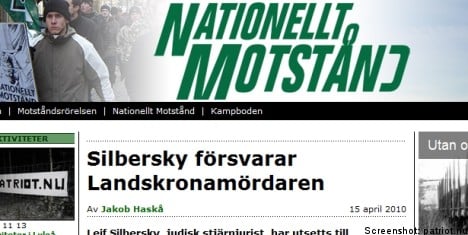 The site is the online version of Nationellt Motstånd (‘National Resistance’), a quarterly print magazine put out by the Swedish Resistance Movement (Svenska motståndsrörelsen), one of Sweden’s most active neo-Nazi groups.

The comment in question, entitled “Immigrants create racist roadblocks”, accompanies an article published in April 2010 about a highly publicized case in which a 78-year-old woman died from injuries sustained from being pushed by a 23-year-old man in a shopping centre parking lot in Landskrona in southern Sweden.

The 23-year-old came from a family of immigrants and his arrest led to heightened ethnic tensions in the town, prompting another right-wing extremist group, the National Democrats, to call a public meeting in the town square to “protest against anti-Swedishness”.

The article, published on April 15th, 2010, told of how star defence attorney Leif Silbersky was set to defend the 23-year-old in his upcoming trial.

The following day, a racially charged comment was published beneath the article which referred to immigrants as “fucking parasites” and encouraged people to “hit back” rather than “back up” when challenged.

The commenter added that he or she feels “satisfaction” every time “I can ‘lay’ my hands” on what he or she refers to as a “kulturberikare”, an increasingly common term of derision used in far-right circles in reference to immigrants.

The term, literally translated as “culture enricher”, is a play by the far-right on arguments in support of multiculturalism which often cite “cultural enrichment” as a positive aspect of diversity.

“This is about Sweden and the Swedes’ survival,” the commenter wrote.

Because ‘Nationellt Motstånd’ reviews reader comments before publishing them, the comment falls under the jurisdiction of Sweden’s libel laws.

Following a preliminary investigation launched in May, Sweden’s Chancellor of Justice (Justitiekanslern – JK), concluded that the comment amounts to agitation against ethnic groups (hets mot folkgrupp), and has filed charges against the site’s publisher, 26-year-old Emil Hagberg for violating Sweden’s press freedom laws.

When reached by The Local, Hagberg declined to comment on the charges, claiming statements made by him and his colleagues at ‘Nationellt Motstånd’ are too often “misinterpreted” in the media.