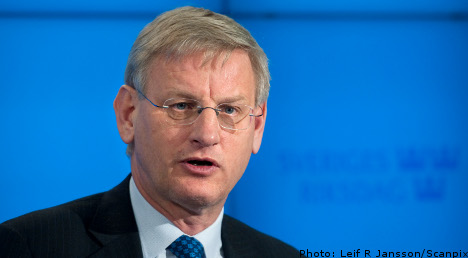 “To talk about enlargement policy and only name the western Balkans, and in a number of speeches forget Turkey, is a little strange and raises questions.

And it’s not a good thing,” Bildt told Swedish public radio, referring in particular to a speech by Van Rompuy in Berlin last week.

In a blog entry posted on November 10th — a day after the speech given in connection with the anniversary of the fall of the Berlin Wall — Bildt said Van Rompuy’s “silence on Turkey is as significant as it is remarkable.”

“He is the European Council’s chairman and must represent the policy the European Union decided on,” he continued.

Sweden, and Bildt in particular, is a strong supporter of Turkey’s entry into the European Union.

Turkey began accession talks in 2005, but has since only succeeded in closing one of 35 chapters that need to be negotiated, with 18 blocked either by the EU as a whole, by the Greek Cypriot-led government, or by France.

When asked on Tuesday about the fact that that Van Rompuy had never visited Turkey nor met with Turkish officials, Bildt said “I expect it is on his agenda to have such a meeting.”