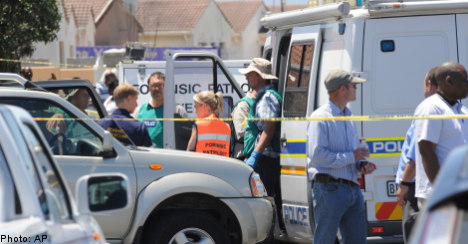 Cele spoke to journalists shortly after 26-year-old Xolile Mngeni, the first suspect arrested in the case, made a brief appearance in a Cape Town court and had his case postponed.

Mngeni and his co-accused, whose name was not released, are accused of abducting 28-year-old Swede Anni Dewani and her British husband Shrien Dewani on the outskirts of Cape Town last Saturday.

The hijackers released the 31-year-old husband, but his wife’s body was later found in an impoverished township neighbourhood southeast of central Cape Town.

Mngeni has been charged with murder and robbery with aggravating circumstances, prosecutors said.

According to the newspaper Die Burger, Mngeni has admitted the murder to police, citing several media. However, there is no official confirmation from the police.

Mngeni was charged on Wednesday with Dewani’s murder.

His case was postponed to November 25 to allow time for a public aid lawyer to be appointed to represent him.

Dewani, from Mariestad in central Sweden, had been in Cape Town celebrating her honeymoon with her new British husband Shrien when their car was hijacked by two armed men at an intersection.

The hijackers later released Shrien Dewani, but his wife’s body was later found in a impoverished township neighbourhood south of Cape Town.

Like Mngeni, the man whose arrest was announced Thursday is a 26-year-old resident of Khayelitsha, a poor area near where Dewani’s body was found, Cele said.

He said police have recovered two cell phones, a bracelet and a watch linking the hijacking to the two men already arrested.

He said the post mortem investigation did not uncover evidence of a sexual assault.

According to media reports, the post-mortem also showed that Anni Dewani died of a single gunshot wound to the neck and her body had been released to her family.

South Africa has one of the highest murder rates in the world, with an average 46 killings a day last year, according to official statistics.