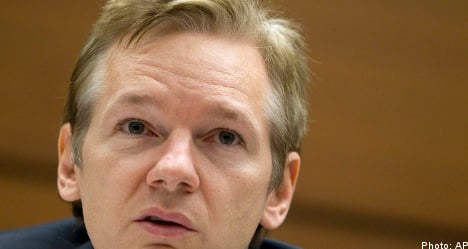 Swedish prosecutors submitted the request for the remand order to the Stockholm District Court earlier on Thursday.

“It has been decided that he be detained in absentia,” Alan Camitz, a Stockholm district court judge on the case, told AFP.

Prosecutor Marianne Ny, who had requested the detention earlier Thursday, meanwhile said an international arrest warrant would soon be issued for the founder of the whistleblower website.

Assange had been detained in his absence “on probable cause suspected of rape, sexual molestation and unlawful coercion,” she said in a statement, adding that “to execute the court’s decision, the next step is to issue an international arrest warrant.”

In an interview with AFP, Ny, the head of the department that oversees prosecution of sex crimes, explained that “I requested his arrest so we could carry out an interrogation with Assange. That is the reason.”

A warrant was first issued for Assange’s arrest on August 20 by another prosecutor on suspicion he had raped one woman and sexually molested another, but the warrant was withdrawn just hours later.

Ny reopened the rape probe against the 39-year-old Australian on September 1, but did not request his detention, making it possible for him to leave Sweden.

“We have exhausted all the normal procedures for getting an interrogation (and) this investigation has gotten to a point where it is not possible to go further without interrogating Assange himself,” Ny explained Thursday.

She said she did not know where the former hacker was currently and had “no idea” how to get in touch with him.

Assange’s British attorney Mark Stephens meanwhile said his client was in London, blasting the prosecutor’s decision to seek his arrest and describing the case as “not a prosecution, but a persecution.”

Speaking before the Swedish court made its decision, Stephens said his client had been in London “this morning” but he did not know his whereabouts later in the day.

“He hasn’t run away from this. He has sought to vindicate his name,” Stephens told AFP.

In a statement issued before the court ruling, Stephens insisted that “despite his right to silence, my client has repeatedly offered to be interviewed, first in Sweden before he left, and then subsequently in the UK (including at the Swedish Embassy), either in person or by telephone, videoconferencing or email and he has also offered to make a sworn statement on affidavit.

“All of these offers have been flatly refused by a prosecutor who is abusing her powers.”

Assange’s lawyer in Sweden, Björn Hurtig, also said the prosecutor’s petition was “exaggerated” and “out of proportion.”

He stressed to AFP that his client “is absolutely prepared to come to Sweden (and) wants to cooperate,” and had even proposed some dates that would work for him, “but we have not been able to agree.”

Ny meanwhile said she was not aware of any offers from Assange to come to Sweden for an interrogation.

“I would like to stress that the district court shared our opinion that there is flight risk in this case,” she said, adding that the international arrest warrant would be issued “soon” through Interpol.

The 39-year-old whistle blower has since admitted that he had met both women in question, who according to their lawyer are both Swedish and aged between 25 and 35, saying “they were both at my press conference.”

Assange has repeatedly denied committing any crime and has criticised how Swedish prosecutors have handled his case.

“I am very disappointed at the Swedish authorities,” the Australian activist journalist told the Svenska Dagbladet (SvD) newspaper earlier in November.

“I plan to sue, several different lawyers have advised me to sue.”

Forcing Assange to come to Sweden when it suits the prosecutor “could lead to catastrophic consequences for him and his organisation, not least economically,” Hurtig insisted, pointing out that his client “has a lot of work to carry out (and) a lot of that would fall through.”

aimed at discrediting his whistleblower WikiLeaks website, which is locked in a row with the Pentagon over the release of secret US documents about the wars in Iraq and Afghanistan.

US intelligence services “are probably very happy now,” he said in an interview with AFP in September, adding however that “mentioning their involvement is for now only speculation.”

WikiLeaks last month published an unprecedented 400,000 classified US documents on the Iraq war and posted 77,000 secret US files on the Afghan conflict in July.

As for the two women at the centre of the Swedish rape and sexual molestation probe, whose names have not officially been made public, Assange admitted in a September interview with AFP that he had met them both, but refused to say if he had sex with either of them, calling it “a private matter.”

“Finally. This should have been done earlier,” he told the TT news agency, adding that neither he nor his clients would be permitted to be present at Thursday’s hearing.

“That is unusual, but not unique and is probably related the fact that

in this case,” Borgström said.

Two days before the allegations against Assange were made public in August, he had applied for a work and residency permit in Sweden, where some of WikiLeaks’ servers are situated, but his application was turned down on October 18.