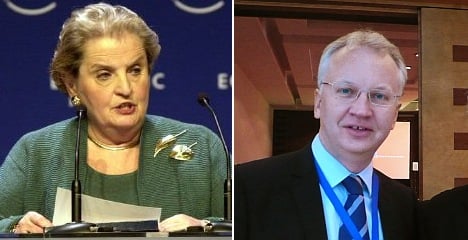 Nuder was one of four new recruits for the Albright Stonebridge Group, which describes itself as “global strategy firm” and is run by the former US secretary of state.

“David Good, Oakley Johnson, Joseph Kitamirike and Pär Nuder will be invaluable additions to our global team,” said Madeleine Albright in a company statement on Thursday.

“The remarkable range of experience and expertise that these individuals bring will even further enhance our ability to help our clients understand and succeed in a new global marketplace that operates at the intersection of business, government, finance and civil society.”

Nuder, who served as finance minister from 2004-2006 and formerly as culture minister, was also a state secretary to former prime minister Göran Persson. He has appointed by Albright Stonebridge Group to be a senior director and will be based in Stockholm, with a focus on Scandinavia and the Baltics.

When Göran Persson quit the party leader post in 2006, Pär Nuder was named in the running but was beaten by Mona Sahlin. After Sahlin’s resignation last weekend, Nuder has once again been named as a potential leader of the troubled Social Democrats, but according to media reports he has now ruled himself out of the job.

“He just laughs at the interest. He has no intention of returning to Swedish domestic politics,” said an unnamed Social Democrat MP to the Expressen daily on Thursday.

Aside from his new position with the Albright Stonebridge Group, Nuder is also on the board of a slew of companies, including the crystal glass firm Örrefors Kosta Boda.

Nuder’s reported disinterest in the job as Social Democrat party leader comes after other prominent candidates, Thomas Bodström and Margot Wallström, categorically ruled themselves out of the running.

Bodström is currently living with his family in the US and stated that he had no intention of cutting his stay short, while Wallström works to combat sexual violence in conflict in her role at the United Nations.

Veronica Palm, an MP since 2002 and chair of the powerful Stockholm district of the Social Democrats, has however not declared herself as a candidate asking for more time to think about it.

Mikael Damberg and Veronica Palm, with political allegiances in the right and left of the party respectively, surprised observers by holding a joint press conference this week, prompting a debate on whether the party should consider the appointment of a joint leaders.