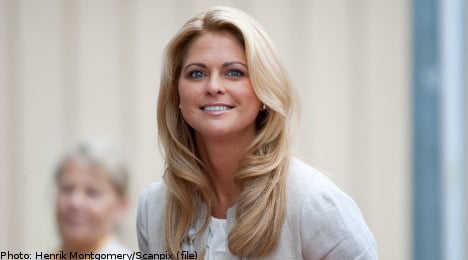 “What I went through was very private, and that everything was so out there made it a very difficult period in my life,” the princess told business daily Dagens Industri in her first interview since the very public break-up in April.

The palace had announced in August 2009 that Madeleine, now 28, was to marry 31-year-old Jonas Bergström, a Stockholm lawyer she had been dating for seven years.

But in a short statement in April, the palace said the couple had “gone separate ways” after intense media coverage of the allegedly troubled relationship, including claims from a Norwegian woman that she had an affair with Bergström.

She now works there with the World Childhood Foundation, a grant-giving organisation set up by her mother in 1999.

“It was nice to leave Sweden just then. I had already earlier wondered about maybe moving to New York, so it followed naturally to move here,” she told the paper in an exclusive interview from the US city.

She credited her older sister, Crown Princess Victoria, with helping her through the break-up, including one instance where she stood in for her at an official engagement.

Since leaving for New York, Madeleine has only seldom returned to Sweden, making a public appearance at Victoria’s June 19th wedding.

The princess was on Friday in Stockholm for a forum on children’s rights, and told the paper she would only return at Christmas, meaning she would be absent at the Nobel Prize gala, an event traditionally attended by the entire royal family.

The Swedish royal family has been in the spotlight this month following the publication of a tell-all biography of the king, which in turn prompted detailed revelations in the press from an alleged former lover.