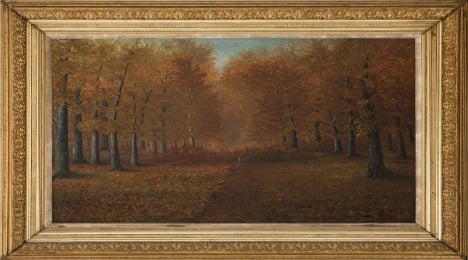 The painting, a landscape of a Swedish forest by the Turkish painter Ahmet Ali Pascha was sold by the Skånes Auktionsverk auctioneers in Landskrona on Sunday for 1.65 million kronor ($242,000).

“We noticed that the painting was of good quality and once we had confirmed that everything was genuine, we looked at prices for the artist. This was not a typical subject for the painter and was hard to value,” said Skånes Auktionsverk CEO Pia Stäel von Holstein to The Local on Monday.

The painting was placed on sale as part of the auctioneer’s International Autumn Sale and given a guide price 75,000 – 100,000.

“We advertised internationally and we received a great deal of interest for the painting, which we were right in thinking would come from collectors of Turkish origin,” said Stäel von Holstein, explaining that “Şeker” Ahmet Ali Pascha was a national painter in 19th century Turkey and was close to the Sultan.

The sale created a buzz of interest at the Landskrona auction on Sunday with up to six telephone bidders competing to win the bidding.

The auction house has not yet managed to establish the history of the painting and why the Turkish painter chose the Swedish forest scene, nor how it came into the hands of the family.

As the seller had been away on holiday, he only learned of his windfall on Monday morning.

“He came back from Tenerife in the early hours. He was shocked and happy. Very happy,” Pia Stäel von Holstein said.

Stäel von Holstein told The Local that it had not yet been established if the sale was a record high for the painter, but said that “internationally this is a high price”.