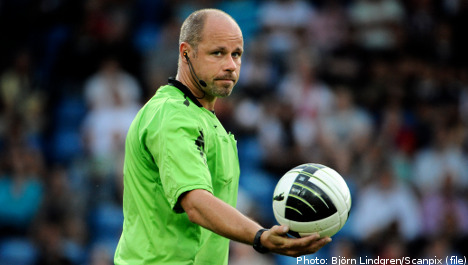 The SFA are contractually bound to supply referees for matches and while there has been sympathy expressed for Scotland’s under-fire officials, who confirmed yesterday that they would go on strike, SFA chief executive Stewart Regan revealed that he has contingency plans, one of which is looking to Scandinavia.

“We have talks scheduled for the next few days but clearly with a contract to be fulfilled with the Scottish Premier League we have to put a contingency plan in and that’s what we are doing at the moment by looking elsewhere for officials.”

The Swedish authorities confirmed that they are waiting on developments from Scotland.

“If the question comes we will consult with the other Nordic countries,” Swedish Football Association chairman Lars-Åke Lagrell told Swedish news agency TT.

He added: “A popular opinion of referees has been shaped and it can’t be left that way.”

The head of Swedish referees Bosse Karlsson commented: “We will consult our football association, our referees and UEFA. We have to reflect with our referees on their position on replacing striking colleagues.”

Stewart Regan was meanwhile among those expressing sympathy for the Scottish officials who he said “have been under massive scrutiny”.

allegiances before matches which seemed a very bizarre request and quite frankly I think they have had enough,” he said.

But Regan argued that with contractual obligations to cover the 20 games planned for the weekend, the SFA has been obliged to consider other alternatives.

“It could be the Republic of Ireland, it could be the Scandinavian countries, there are a number of options open to us and we will be exhausting all of those. We’ve got to make sure we bring in referees from those countries who are available,” he told radio station talkSPORT.”

The season in Scotland so far has witnessed several high-profile refereeing controversies, notably involving Dougie McDonald’s handling of Celtic’s 2-1 win over Dundee United last month — during which he awarded Celtic what looked like a deserved penalty before overturning the decision after consulting with another official.

McDonald was warned by the SFA referees’ committee over his failure to give an accurate report of the circumstances surrounding his decision to rescind the Celtic penalty.

Celtic chairman John Reid, a former British Government minister, said Thursday McDonald should quit or be removed by the SFA after he admitted misleading Hoops manager Neil Lennon over the penalty decision.

Lennon has also been particularly vociferous in his criticism of officials after defeats by Rangers and Hearts.