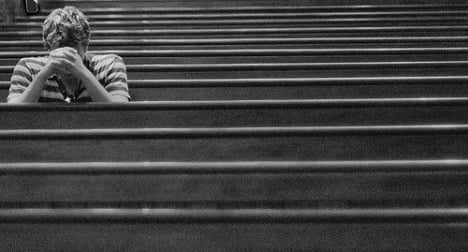 Pupils at Gånghester school in the municipality attended an end-of-term service in June at the local church in a service conducted by a pastor. One of those in attendance filed a complaint with the inspectorate after pupils were encouraged to join in prayer.

“It is important that schools shape the end of term so that all can take part in such a happy occasion – pupils, parents and staff,” inspectorate lawyer Anna-Lena Olsson told The Local on Thursday.

“Parents should be able to trust that when they send their children to school, they are assured that children are not affected in one or other [religious] way of thinking.”

The inspectorate has established in several rulings that holding end-of-term celebrations on church premises is not itself in breach of the curriculum or the constitution, nor is the presence of a religious leader, but it has stipulated that the occasion should not be an expression of a particular religious faith.

“The line for when end of term celebrations are to be considered an expression of religious faith has to be drawn on a case by case basis, and here we decided that prayer has to be considered to be a confessional element,” Olsson said.

In its defence, Borås told the inspectorate that the programme for the end-of-term celebrations had been discussed and decided upon within the school council, on which parents from each class are represented.

Meanwhile, the school confirmed that all religions are taught during the school year and argued that this negated the possibility that pupils could be influenced in any particular religious direction.

“The main ingredient of the end-of-term celebrations was that pupils in every class are given the possibility to express their joy and create a pleasant atmosphere by singing summer songs,” the municipality wrote in a submission to the inspectorate, arguing that the prayer element of the proceedings was “short and well adapted.”

The inspectorate bases its decisions on a series of legal documents, including the schools law, as well as the national curriculum.

The Swedish constitution stipulates that public services should work against discrimination on the grounds of, among others, religious faith. The constitution protects individuals from being obliged to reveal their position in political, religious or cultural matters.

The right to freedom of religion, as is the right not to follow any religion, is enshrined in the European Convention on Human Rights (1994), to which Sweden is subject.

The schools law stipulates that all children of school age must participate in organised activities and according to the school curriculum end of term celebrations are to be considered part of regular teaching. The curriculum requires that compulsory schooling should be “non-confessional…objective and comprehensive.”

The inspectorate has thus criticised Borås, calling for the municipality to submit a report by February 2011 detailing measures taken to address the issue as a result of the decision.

According to the local Borås Tidning, Lena Sundbaum, the recently appointed principal of Gånghester school, confirmed that the celebration at the end of the autumn term will be held in the school’s sports hall.

Independent faith schools are permitted in Sweden and while they are able to adopt a more distinct religious character, teaching is subject to the same requirements and the schools are subject to the oversight of the inspectorate.

“Schools can have religious elements and profiles – there are a number of schools in Sweden with Christian and Muslim profiles – but teaching has to be non-confessional and objective,” Olsson told The Local.