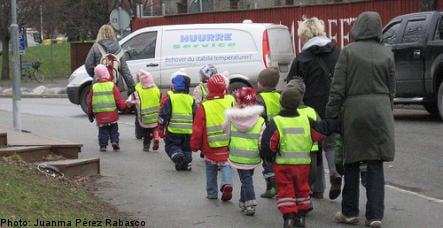 Sveriges Radio’s Ekot news bulletin reported on Thursday that it was the fifth consecutive year that the proportion of children in families dependent on what were formerly known as social benefits according to statistics it compiled from the National Board of Health and Welfare (Socialstyrelsen).

According to Ekot’s compilation of the board’s statistics, in the first quarter of this year, the number of families with children on welfare rose eight percent from 2009, by five percent in the second quarter and four percent in the third quarter.

The agency also registered a sharp increase of households with and without children on long-term benefits to 65,985 in 2009 from 23,005 the previous year.

Cecilia Nauclér, press director of Children’s Rights in Society (Barnens Rätt i Samhallet, BRIS), a Swedish children’s rights non-profit organisation, pointed out children tend to not talk about financial problems when they call its hotlines, so it is difficult to gauge the depth of the financial difficulties they may be experiencing.

“We haven’t seen an increase in children contacting us due to financial problems. The family conflicts may be about money, but children don’t say that when they contact us,” she told The Local on Thursday.

Nauclér added that the financial problems are not the major challenges for the children who contact the organisation.

“There are poor children who can’t go on school outings because they don’t have the money. We have a few contacts like that, but not many. Children contact us when they have major ongoing conflicts,” she said.

In addition, Nauclér noted that unemployment, often due to psychological issues, among one or both of the parents is a bigger problem than the financial situation the family is in as a result of receiving benefits.

“The children say that the problems they are having are the parents arguing or aren’t feeling well, not the financial reasons,” she said.