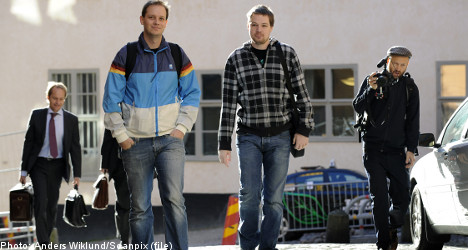 All three of the men have been sentenced to prison, although their terms have been reduced from those initially handed down by the lower court.

“The Appeals Court, like the district court, finds that The Pirate Bay service makes possibly illegal file sharing in a way that entails a punishable offence for those who run the service,” the court said in its ruling.

In addition, the court of appeal increased the compensation the defendants are required to pay up to 46 million kronor ($6.57 million). Lawyers for the entertainment industry had requested damages of 120 million kronor.

“This is wrong, this is just really wrong. Now it’s time for the Swedish legal system to shape up a little bit about what they think and believe about the world. This is just reprehensible, totally and utterly reprehensible,” Sunde told the TT news agency.

Ludvig Werner, chair of the Swedish arm of the International Federation of the Phonographic Industry (IFPI), called the verdict “an extremely clear signal.”

Each man was sentenced to one year in prison. They were also ordered to pay a total of 30 million kronor in damages.

The appeals court didn’t review the case against Svartholm Warg because he was sick in a hospital in Cambodia during the trial. He is set to receive a new trial at a later date.

The court of appeal ruled that evidence showed that the three men charged in the case had been involved in facilitating illegal file sharing.

“Unlike the lower court, the appeals court does not believe one can make such a collective decision entailing that everyone carries the same responsibility for what is done within the framework of The Pirate Bay,” the court explained.

“Each one will be puinished only for the acts he has committed himself,” judge Ulrika Ihrfelt told reporters in Stockholm.

Werner was also pleased that the damages claim was increased by more than 50 percent.

“This is positive news, naturally, because the appeal and the district court result are so similar,” said Werner.

He pointed to other sites that carry out similar activities and hopes they will also consider what the ruling entails.

Monique Wadsted, an attorney representing American record companies, was pleased with the ruling.

“It’s a relief that the court of appeal finally affirmed that if you carry out this type of activity, you’ll go to prison,” she told TT.

“In two years, this type of piracy will be over. After a ruling like this and all the pioneers start to get older and have children and families, piracy won’t occur to this extent.”

While Christian Engström, a member of the European Parliament representing the Pirate Party, called the ruling “depressing,” he disputed whether the ruling would affect file sharing.

“The judgement has no meaning for file sharing. It has continued to increase from year to year and the technical capabilities continue to develop,” he told TT.

During last year’s trial, the defendants maintained that file sharing services can be used both legally and illegally, insisting their activities were within the law. They vowed to wage a lengthy legal battle and to take the case to the Supreme Court if necessary.