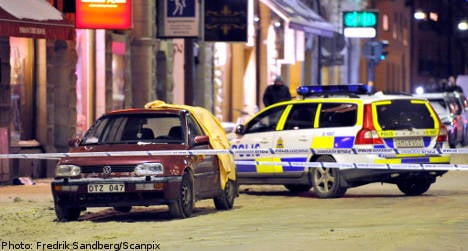 The suspected gunman has now been formerly arrested and a weapon, thought to be the murder weapon, has been found.

Police received the alarm over the shooting shortly before 6.30pm. Witnesses were able to point out the direction in which the gunman fled and police gave chase, arresting the man shortly after.

“It was the first unit at the scene which arrested the man,” said Ulf Lindgren, a spokesperson for Stockholm police.

The dead person was sitting in a red car registered to a person living in Uppsala.

A preliminary investigation into murder has been opened and according to a Scanpix photographer, the car was parked on Scheelegatan facing north, a short distance from the main police station in the Kungsholmen area of central Stockholm.

Police on Saturday remained reticent with details pertaining to the victim’s gender, age and other personal details of the suspected killer.

“The identification of the victim is not yet complete and thus next of kin have not been informed.