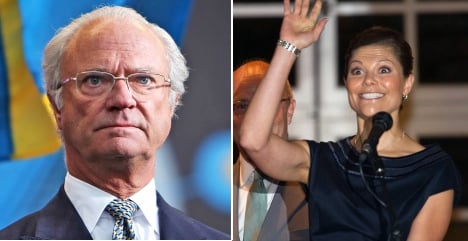 According to polling firm Synovate, only 51 percent of Swedes want to see the King remain on the throne, down from 64 percent in February.

Every third wants to swap the reigning monarch for his eldest child, Crown Princess Victoria, almost double the number in the previous opinion survey.

The survey does not detail what lies behind the King’s declining popularity, but it comes at a time when he has been shrouded in controversy following the publication of an unofficial bibliography containing a slew of controversial revelations.

“A pure speculation is that it could depend on all the recent reports. I can’t rule it out,” said Synovate’s opinion analyst Niklas Källebring to the Dagens Nyheter daily.

The poll also shows that support for the monarchy in general is in decline, contradicting a Demoskop poll published on November 23rd which indicated that support had in fact increased despite the scrutiny over the King’s private life.

Demoskop’s poll, conducted a week earlier on behalf of the Expressen daily, showed that 69 percent of Swedes wanted to see Sweden remain a constitutional monarchy, up from 63 percent when the question was last posed – just prior to the June royal wedding.