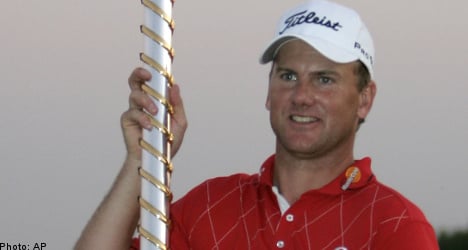 Karlsson has had a dramatic past two years since finishing the 2008 season as Europe’s number one. In 2009, he feared he was going blind following a debilitating eye problem and he was out of action for more than a month this year with glandular fever.

But the Swede announced his return to vintage form as he first chased down and caught up with overnight leader Poulter, then beat him in the playoff that stretched to the second extra hole. Karlsson said it was the biggest win of his career.

“I didn’t have a clue at any stage that I could end up winning this. This must be my biggest win if you just look at the quality of the field that’s been here – world number one [Lee Westwood], world number three [Martin Kaymer]. It’s a fantastic field, so to win here is just great,” said 41-year-old Karlsson.

While Karlsson and Poulter were battling it out, Germany’s Kaymer finished tied 13th at six-under par 282 and won the Race to Dubai to become the new European number one, succeeding current Westwood in the process.

Kaymer, who turns 26 in exactly one month, has become the Tour’s youngest number one since Ireland’s Ronan Rafferty in 1989. The honour was confirmed the moment it was clear that his only challenger for the crown, Northern Ireland’s Graeme McDowell, will not be able to finish any better than tied third.

US Open champion McDowell played the best round of his tournament — a four-under par 68 — but that was good enough only to tie him for the 13th place at six-under par 282 alongside Kaymer.

For Kaymer, the honour came with a bonus cheque of $1.5 million for winning the season-long Race to Dubai.

“Very satisfied with my year. That round today, my goal was obviously to play as good as possible, to put in my 100 per cent there. And that is what I certainly did. It was not my best round of the week, but I really enjoyed the week and I really enjoyed the last round that I played,” he said.

“It’s been a fantastic year. All the goals that I set for myself, for my career, everything happened this year. To win the Race to Dubai, number one in Europe, and to play the Ryder Cup, and to win a major. So we’ll see how we can make it better next year,” Kaymer added.

McDowell expressed his disappointment with the tournament, but was pleased with his season.

“To give Martin a run for his money this week was very good, but things didn’t really go my way. It’s a golf course which continues to frustrate me. Even if I am not the European number one, I am proud of everything that I have done this year,” he said.

Karlsson and Poulter closed the regulation 72 holes in 14-under par 274. Karlsson shot a five-under par 67 round, which included two birdies and an eagle in his first three holes and a birdie on the final hole.

On the other hand, Poulter struggled a tad in the beginning, making the turn at even par, but then two back-to-back birdies on the 11th and 12th set him up for a closing two-under par 70.

While Karlsson played the 18th hole perfectly three times Sunday — he had birdie putts of less than five feet on all three occasions — he got a bit of help from one of golf’s quirky rules.

As Poulter was about to place his ball for his birdie putt from 30 feet, he dropped the ball on the marker, which moved. That meant a one-stroke penalty and he was putting for a par instead, which he missed.

“I’ve gone to mark the ball and literally the ball slipped from two or three inches above the coin. And it’s pitched right on the front of the coin and the coin flipped over. One shot penalty. A lot of positives to take away this week, but right now, I am not really seeing them,” he explained.

Defending champion Westwood (68) finished tied third at 13-under par 275 along with Spain’s Alvaro Quiros, who birdied the last two holes for a 67. Northern Ireland’s Rory McIlroy eagled the final hole to finish alone in fifth place.