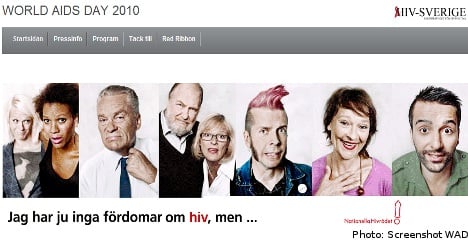 “Today, when there is effective treatment, HIV is no longer a fatal disease. There is no study that shows that punishment for HIV transmission reduces the spread of the virus,” wrote Inger Forsgren, Anders Karlsson, Åsa Regnér and Per Ole Träskman in a opinion piece published in the Dagens Nyheter daily on Wednesday.

Forsgren is the chairperson of HIV-Sweden, Karlsson the head doctor of Södersjukhuset’s Venhälsan, Regnér the general secretary of the Swedish Association for Sexuality Education (Riksförbundet för Sexuell Upplysning, RFSU) and Träskman a criminal law professor at Lund University.

“The law against infectious diseases should undergo a thorough overhaul, the duty to inform abolished and only those who deliberately transmit HIV prosecuted,” they added.

Agneta Holmström, the head of the infectious diseases unit at the National Board of Health and Welfare (Socialstyrelsen), said that she does not know if the duty of disclosure, which requires all those thought to be infected with a sexually transmitted disease to come forward for testing in order to track the spread, has resulted in a spike in HIV cases.

“That’s something for the government department to look into if they decide to look over this act. But our agency, we will continue to look into this and talk to the Swedish Institute of Infectious Disease Control (Smittskyddsinstitutet – SMI) to do a study,” she told The Local on Wednesday.

She added that occasionally, it may involve a misunderstanding when it comes to ordering people to test for STDs, such as having the wrong address on file for the individual.

Among all STDs, Holmström said the one that poses the greatest concern in Sweden remains chlamydia because the general population are “very much aware” of the risks involved with the other diseases, saying that HIV is stable in Sweden aside from occasion outbreaks among drug users.

“They don’t think chlamydia is a serious disease, it’s not life-threatening, they don’t think they have to go and get tested. There has been an explosion in the last few years since 2007. It is very difficult to find the people you have relations with,” she said.

Sweden’s first HIV case was diagnosed in 1982, before AIDS was properly diagnosed by the US Centers for Disease Control. Slightly more than 5,000 people in Sweden currently live with AIDS, said Viveca Urwitz, the former head of the SMI’s HIV prevention unit.

Up until December 2009, a total of 8,935 HIV infection cases had been reported in Sweden, of which 30 percent involved women and 2,310 were diagnosed as AIDS. A total of 486 new cases were reported last year.

Slightly more than 50 percent of the new cases were reported in Stockholm, 14 percent in Västra Götaland and Skåne and the remainder across the country.

Urwitz revealed that more than half of all new diagnosed HIV cases in Sweden every year are among new migrants from high-risk countries, with Thailand and Ethiopia the two most common.

“A lot of them don’t know, some do and some don’t,” Urwitz told The Local regarding HIV-infected migrants to Sweden.

She emphasised that these migrants are not refugees, but those who come to Sweden for family or work purposes.

Overall, the number of people living with HIV in Sweden is slowly growing, particularly among high-risk groups such as men who have sex with other men, intravenous drug users and people who buy and sell sex.

Both Holmström and Urwitz believe that the government’s measures to combat HIV and AIDS are effective, but Urwitz pointed out health care and education, the main drivers behind prevention, are decentralised in Sweden, so it is difficult to ensure the same treatment across the country.