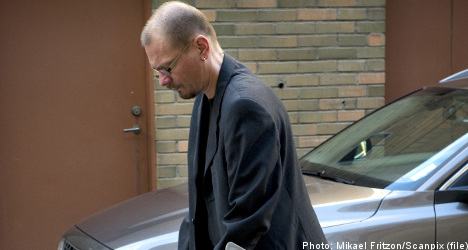 Five directors of the fraudulent financial concern were also convicted, but not sent to prison and will receive suspended sentences or fines and probation.

The prosecution had demanded CEO Peter Rosendahl face eight years in prison before the trial. Separately, the former welder is also banned from running a business for eight years.

Habo Finans’ operations were run through a savings company named Diamanten. Rosendahl told customers that it was a secure savings organisation that would guarantee them a good return.

He also claimed that the Financial Supervisory Authority (Finansinspektionen, FI) had granted the company authorisation and issued it a bank guarantee, so savers were not at risk.

However, the opposite turned out to be true, with no security, authorisation or bank guarantee issued to Habo.

Outwardly, everything appeared in order and the company issued false profits to investors, with the money coming from new investors. As the court put it, the enterprise was a pyramid scheme.

Rosendahl realised rather quickly that the business would fail, the court alleged. However, business carried on as usual and as a result, a large number of savers invested around 100 million kronor ($14.37 million) in the company.

The severity of the economic blow to the savers is still not fully clear. The court puts the figure at at least 50 million kronor, but other information points at 60 million kronor.

Diamanten’s accounts were on the whole non-existent and the five directors of Habo Finans were convicted for not advising Rosendahl to take care of business.

They showed nearly complete passivity, the court alleged. However, since their crimes happened through negligence and not intent, they could not be classified as aggravated.

The small Swedish community of Habo was voted the “best place to live in Sweden” by Fokus magazine in 2010 and many local residents had invested with Rosendahl and Habo Finans in the hope of high returns.